SBC Game of the Week: City of Edinburgh vs Dunfermline Reign

You are here: Home / Blog / News / SBC Game of the Week: City of Edinburgh vs Dunfermline Reign

SBC Game of the Week: City of Edinburgh vs Dunfermline Reign 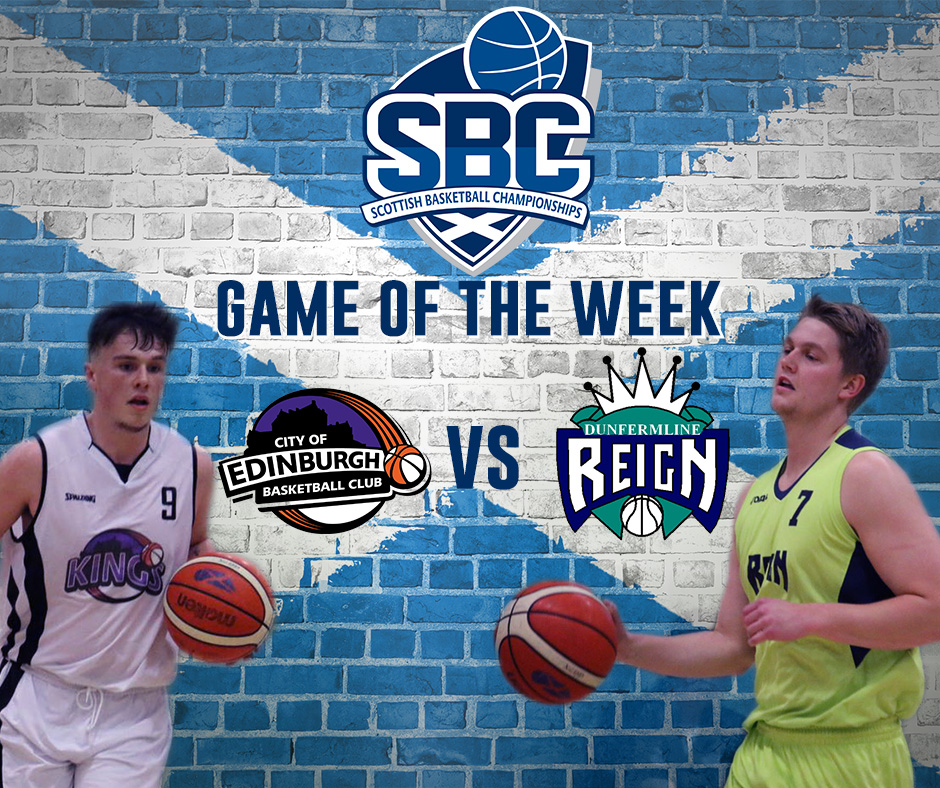 In the first SBC Game of the Week, basketballscotland was in attendance at Portobello High School to witness Dunfermline Reign making history in their first ever away win to City of Edinburgh as both teams got their 2017-18 season underway.

A young and full-strength Reign team faced a weakened City of Edinburgh side who were without their starting centre, Ali Mackay who sat out injured with a broken finger. They were also without Head Coach, Craig Nicol, meaning that former Scotland guard, Garreth Lodge would lead the coaching duties alongside his on-court activities.

City of Edinburgh finished 4th in the league table last year after winning 13 out of their 18 regular season games. Dunfermline Reign, on the other hand, finished 8th in the league table in 2016/17 and along with City of Edinburgh, bowed out of the 2017 Playoffs in the first round. Going into the first game of the season, both teams would be looking to start the campaign strong with a win.

City of Edinburgh struck first coming out of the gate, as Captain, Paddy Campbell made a jumper in the corner to give the team an early lead. This would not be the case for long however, as Nicky Sim answered back for Reign, pulling up from the free-throw line and hitting the jump-shot. As the game went back-and-forth and both teams began to find their footing, Kings’ Campbell eventually hit a contested three over Euan Pennie to put the game back in City of Edinburgh’s favour.

Reign proceeded to then go on a 17-2 run as City of Edinburgh struggled to hit shots. Craig Ferguson was tenacious in the open court for Reign, running the break to near perfection and finding shooters in the corner for easy threes. Euan Pennie was another key factor in Reign’s run, finishing on a fast break and-1 layup and then after Kieran Lynch found him in the corner, driving in for the finish to put Reign up by 10 at 17-7. Eric Potts also made his presence felt inside for Reign, finding good position in the post to spin off his defender for the finish, as well as being in the right spot at the right time in numerous pick-and-roll settings.

“We started very strong, very fast, we moved the ball, I thought we played good defence, which put them under a lot of pressure and they didn’t want to keep up with us on the offence. Their transition defence allowed us to get good open baskets in the first half” said Reign Captain, Kieran Lynch speaking with basketballscotland after the game.

With Reign up 19-7, City of Edinburgh began to relinquish their scoring drought as newly-signed Kyle Jimenez was fouled on the way to the basket, sending him to the line where he knocked down both shots, giving him his first two points of the evening. On the next possession, Paddy Campbell received the ball on the wing, and after faking out his defender, he stepped back and hit the jumper from the corner to bring the game back to single digits, only for Euan Pennie to finish a layup on the other end as City of Edinburgh were slow to get back on defense. Kyle Jimenez scored the last basket of the quarter as he beat his defender and faked the help man with a eurostep to finish inside and the first quarter finished with Reign up 21-14.

The second quarter started with Reign scoring the first three baskets of the period as Jake Sirrell hit on an early two-pointer and Nicky Sim and Craig Ferguson each finished a layup of their own. Ryan Armour then answered for City of Edinburgh, hitting a three from the top of the arc. Garreth Lodge scored his first points of the night, faking out two defenders and finishing the off-hand layup at the rim to narrow the deficit to 27-19. Nicky Sim responded for Reign as he attacked the basket, finishing the layup and drawing the and-1 call, but would miss the free throw.

With both Sim and Craig Ferguson on the floor, the pair proceeded to take over the game for the rest of the second quarter, continuing to take advantage of City of Edinburgh’s poor transition defense. After City of Edinburgh’s Calum Nicol missed a shot over Eric Potts, Ferguson corralled the rebound and went coast-to-coast for the finish to push the lead to 31-19. Nicky Sim then made two free-throws, followed by Ferguson gathering the ball on the wing, faking the pass, driving to the basket and hitting the floater from the block. On the following possession Sim would then find Ferguson in the corner for the catch-and-shoot three, giving Reign a 17-point lead.

Paddy Campbell continued to be a major contributor for City of Edinburgh, finding himself with a mismatch over the smaller Callum Knox and spinning off him to finish inside. Callum Knox then responded for Reign, as he came off a pick and forced City of Edinburgh center, Simon Flockhart to switch on to him, from which he would step back, gather and knock down the deep two-pointer to extend the lead to 40-21. On a following inbounds play, Paddy Campbell would collect the ball and span off his man to hit the jumper from the block.

City of Edinburgh were still struggling on a shooting front as they neared the end of the half, allowing Reign to capitalise by pushing the ball in the open court and converting on the fast break. As the second quarter came to a close, both teams went to the locker room with the Reign up 26-44.

As both teams came out of the break, it was Craig Ferguson who struck first for Reign, hitting a two-pointer from the wing. Garreth Lodge then attacked the basket, eurostepping his way inside but was subsequently fouled, sending him to the line. After making the first free-throw, he missed the second to be rebounded by Kyle Jimenez who would be there for the putback finish. Jimenez then went on a scoring tear, proceeding to score the next 13 straight points for City of Edinburgh as he was able to tactfully get past his defender and excelled at finishing at the rim and drawing foul calls.

In what was a relatively slow quarter in terms of scoring, City of Edinburgh still struggled to shoot from outside as Reign were quick to close out their shooters. Reign continued to keep up their shooting form throughout the quarter, with Ferguson converting on a three in the corner. After a missed shot from City of Edinburgh, the ball would be collected by Nicky Sim, to assist on a play to Callum Knox who sank a deep three-pointer from the wing pushing the score to 55-36 in Reign’s favour.

Jimenez was continuing to fire on all cylinders throughout the quarter for the capital side as he was fouled on his way to the basket and subsequently knocked down two free-throws. Reign then found Eric Potts inside who used a nifty spin from the post to get two points. With the clock winding down, Jimenez attacked the basket once again and finished inside just before the end of the quarter, trimming the score to 57-40 going into the final period.

Going into the fourth, it was Callum Knox who made the first impact of the quarter for Reign, as he beat his defender and went high off the glass for the floater over Simon Flockhart. Niall Mackle then hit back with the first points of the quarter for City of Edinburgh, as he was fouled on an offensive putback attempt and went on to sink both free throws. Jimenez then managed to put another two points on the board as he faked his defender with a eurostep and finished at the basket. Callum Knox responded as he found himself in space under the basket and drew the help man, “no-look” passing to a cutting Nicky Sim who finished and put Reign up 61-44.

City of Edinburgh seemed to have found a new sense of urgency with the game in the balance and appeared to be mounting a comeback after Ryan Armour received the ball from Paddy Campbell at the top of the arc and subsequently hit a three, to be followed by Campbell finding space off a screen to hit a jumper of his own. Unfortunately for them, Reign were not letting the game slip away from them and continued to stand fast, getting stops on defense and converting on the other end.

With just over a minute left on the clock, Campbell found Jimenez in the corner for the three, trimming the score to 71-60. Garreth Lodge drove to the basket on the next possession and kicked it out to Ryan Armour who received the ball on the arc once again, faked his defender, and sank the three-pointer to trim the lead to single digits at 71-63. With a minute left on the clock and with City of Edinburgh needing a stop, the ball came to Reign’s Euan Pennie who muscled his way inside and dropped it off to Eric Potts who made the contested shot inside, putting Reign up 73-63 with 50 seconds to go and ultimately sealing the game for the away side. Both teams would then go into team fouls and the game would finish 76-66 in Reign’s favour.

In what was a great team performance by Dunfermline Reign, four players finished in double figures. Eric Potts was the team’s leading scorer with 17 points, closely followed by Nicky Sim with 16 points, and Craig Ferguson and Euan Pennie who both had 14 points.

Kyle Jimenez was the City of Edinburgh’s leading scorer with 24 points, followed by Paddy Campbell with 18 points.

We caught up with stand-in City of Edinburgh Player/Coach, Garreth Lodge who had the following to say about the game;

“We’re disappointed to lose tonight but full credit to Reign, they played well and shot the lights out. We are a team still coming together and when we get some key guys back fit, we’ll be better. I’m confident we can still be real challlengers in the league this season.”

In Dunfermline Reign’s next game, they will play host to St Mirren West College Scotland, whilst City of Edinburgh will travel away to Stirling Knights.