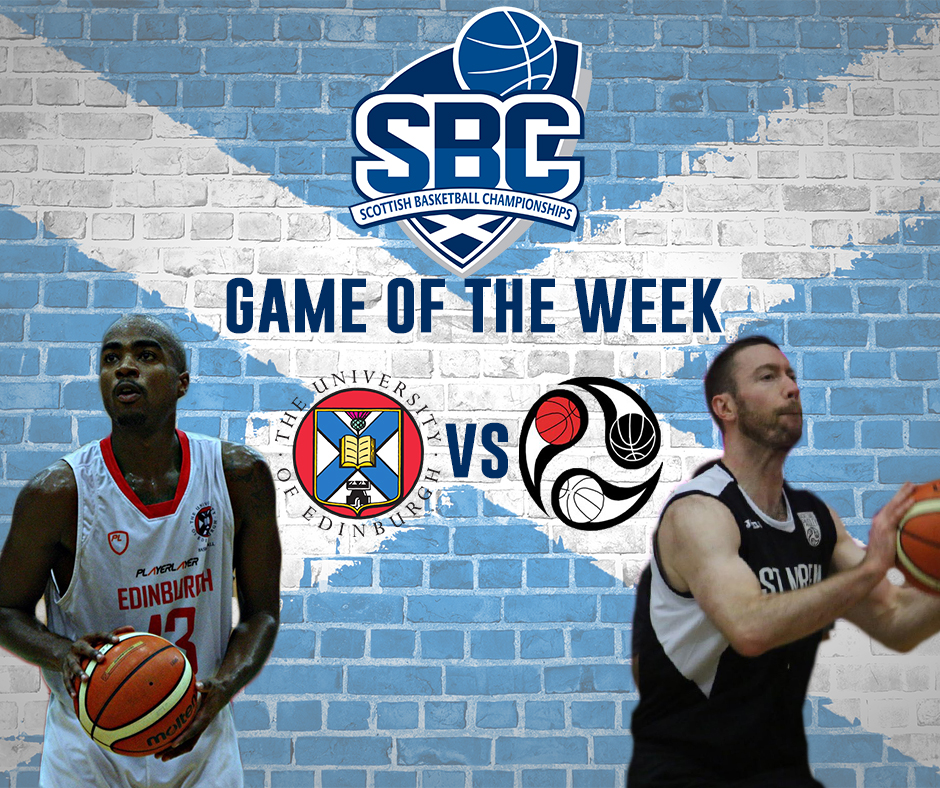 This week, the SBC Game of the Week team was in attendance at Pleasance Sport Complex and Gym to watch the University of Edinburgh host St.Mirren West College Scotland. St. Mirren would come away with a hard-fought win, edging out the University side 75-72.

The home team, Edinburgh University came into the weekend’s fixture  1-2 in the league, having lost their first two games at the hands of Stirling Knights and Pleasance BC, and picking up a win against Glasgow University. The visitors, St. Mirren had had a slightly more fortuitous season so far, winning 2 out of 3 games against Dunfermline Reign and Stirling Knights, but were handed a loss by City of Edinburgh Kings.

After St. Mirren won tip-off, they would strike first in the game as Fergus Harte cleaned up a miss inside by Colin Railley. Nick Collins then added to the score with his first bucket of the game, forcing a turnover on Cameron O’Donnell and taking the ball coast-to-coast for the finger roll on the other end to give St. Mirren an early 4-0 lead.

Cameron O’Donnell came out of the gate raring to go, posing a legitimate threat from deep for Edinburgh. After putting the first points on the board for the home side with a three-pointer from the corner, he then gave his team a 6-4 lead with another three from the top of the arc.

Edinburgh would then proceed to go on a 8-0 run as they settled into their offense and got out on the fast break. This was started off by Reece Jackson who forced a turnover and sprinted up court to finish over his defender on the other end. On the ensuing possession, Enrique Moreno found a cutting Laurits Juffer for the dunk as St. Mirren were slow to get back on defense. After sinking a free throw, Christopher Arazim would then cap off Edinburgh’s run, as he hit a three-pointer from a Reece Jackson hand-off to give the home side an early 14-4 lead in the first.

Edinburgh continued to play well on both sides of the floor for the remainder of the first quarter. On the defensive end, they locked down the paint, double-teaming Nick Collins and Christopher Cleary in the post and making it very difficult for them to operate inside. After Chronis Dimitrios found O’Donnell on a nice pick and roll action, St. Mirren began to find their footing in the game. They would go on to score 7 points before the end of the quarter, as they forced Edinburgh to commit turnovers leading to Collins, Chris Barron and Euan Glass all finishing on the other end. However, as the first quarter ended, Edinburgh still held a steady 20-12 lead over the visitors.

🚨END 1ST🚨@UofEBasketball race out in front at the end of the first 10 minutes. 20-12 the score. #SBCGotW. pic.twitter.com/E1HrJKhSQh

St. Mirren came into the contest with a lessened squad due to injuries. With just an 8-man squad, this would quickly become 7 as Colin Railley went down with an injury early in the second quarter. Despite the loss of one of their players, St. Mirren was not letting this stop them getting back in the game. Nick Collins scored the first 6 points of the quarter for his team as there was very little that Edinburgh could do to stop him once he got into the paint.

St. Mirren were excellent at getting out on the break for the majority of the game. Upon grabbing the rebound, there was always at least one player well ahead of the pack to pick up an easy pass over the heads of Edinburgh’s trailing defense and finish off the play as no one was there to protect the rim.

Despite the push from St. Mirren, Edinburgh continued to keep them at arm’s length for the remainder of the first half. Moreno had an entertaining series of events for Edinburgh as he beat his defender off the dribble and pulled up from the free throw line for two points. Following that, he then stole the ball off the inbounds and dished it to Arazim who knocked down a long two-pointer to extend Edinburgh’s lead to 31-20

As the first half neared its end, Cameron O’Donnell and Nick Collins took turns to score for their team. After Collins drove into the paint and finished an off-hand, and-1 finish, O’Donnell replied, beating Collins off the dribble and pulling up for two. Collins would then answer back, as Cleary grabbed an offensive rebound and dished it out to Collins for the shot from the wing. O’Donnell then scored his final points of the half, as he was left alone in the corner and knocked down the three-pointer. With time running out, Moreno found Jackson on the wing, who faked his defender and hit a two-pointer just before the timer expired to put Edinburgh up 39-31 as both teams went to the locker room.

Reece Jackson of @UofEBasketball hitting the shot just before the first half clock expires #SBCGotW pic.twitter.com/bRrFAvXdEg

Coming out of the break, St. Mirren played with a lot more intensity than we had seen in the previous half. They quickly narrowed the deficit, trimming Edinburgh’s lead to 40-38 as Scott Armstrong, Christopher Cleary, Chris Barron all put points on the board. Not getting back on defense really hurt Edinburgh in the third quarter, as in a similar fashion to the first half, St. Mirren took advantage, scoring a number of points as a result of fast breaks.

“We allowed them to go on fast breaks that they shouldn’t have gone in the third period.” Said University of Edinburgh coach, Achilleas Chatzitheocharis, “The third period was key for us, allowing them to get back in the game with fast breaks and also we did not block some easy shots that they got in our half of the game.”

Despite only scoring 13 points in the third, Edinburgh kept St. Mirren at bay for most of the period. Arazim continued to play well for his team, at one point going coast-to-coast, beautifully crossing up his defender on the way and finishing on the other end. Coming out of a timeout Arazim would hit again, knocking down a contested three-pointer over his defender to keep Edinburgh’s lead at 50-46.

However, Edinburgh could not keep their lead for long. They allowed a lot more offensive rebounds in the third, allowing St. Mirren to claim a number of putbacks and second-chance possessions. With Edinburgh up by one at 51-50, Cleary pulled down another offensive rebound and was fouled on the putback attempt, sending him to the line where he knocked down both free throws to give St.Mirren a 52-51 lead. Rodrigo Colorado quickly gave the University the lead once again as he drove baseline for the finish, but St. Mirren would then go on a 6-0 run to close out the quarter, giving them a 57-53 lead going into the final quarter.

The lead would change hands four times in the fourth quarter as the game went back and forth. Edinburgh tied the game early in the period, as Moreno found O’Donnell on the wing who hit a two-pointer to tie the game at 57 a-piece. After Harte pulled down an offensive rebound, dribbled the ball out and knocked down a two-pointer to give St. Mirren the lead once again, Edinburgh then went on an 8-2 run to give them a 65-61 lead once again.

Arazim then hit another three-pointer to put Edinburgh up by 5. Following this, St. Mirren made a late surge, scoring 7 straight points that was capped off by Euan Glass finding Fergus Harte on a fast break, providing an excellent bounce pass through two defenders, followed by Glass converting a layup of his own to give St. Mirren a 70-68 lead.

In a period where both teams struggled to put the ball in the basket, the game eventually got to the point where St. Mirren were up 73-72 with 30 seconds left in the game.

In what was a very frustrating series of events for Edinburgh, Moreno missed a three-point attempt, for O’Donnell to miss the putback. This was then picked off by Jackson who eventually found O’Donnell who missed the three-point attempt to put his team up. Collins picked up the rebound and passed the ball to Barron who was fouled and went to the line to make both and put St. Mirren up by three at 75-72.

Then with 11 seconds left on the clock, Edinburgh called a timeout. On the inbounds play, Chronis Dimitrios received the ball at top of the arc and, in what could be considered some shaky decision making in the moment, drove inside and offloaded it to Jackson who missed on a reverse layup attempt. The ball was then rebounded by Collins who passed it to Glass who ran up court and drew a clear path foul. After Glass missed both free throws, St. Mirren got the ball back and passed it into cleary who got fouled with 1.7 left. Cleary missed both, hitting off the rim on the second attempt allowing the clock to expire and St. Mirren to come away as the victors, winning 75-72.

Nick Collins lead the way in scoring for St. Mirren with 25 points for the game. Christopher Cleary also added 19 points in the teams win. For the University of Edinburgh, Cameron O’Donnell and Reece Jackson both had 16 points.

We caught up with St. Mirren coach, Stuart Glass after the game who had the following to say about his team’s performance;

“the guys have been a team for a while and they’ve been in these situations before and we managed the end of the game quite well and as it proved, 75-72, we had the experience to get by.”

“When we were down ten, it was a period of low intensity and we’ve been working on that, we were actually playing with less intensity than the home team, so we had to just up the intensity, commit a bit more.”

University of Edinburgh coach, Achilleas Chatzitheocharis took a lot of positives from his team’s performance despite the tough loss;

“We had the intensity the that we were looking for as a university team, we did have good shooting most of the game, we were quite quick, especially in the first half as we should be…… Maturity is an important thing we need to focus on, plus evolve on the defensive end and our reaction to the opponents”

In Edinburgh’s next game, they will travel away to Glasgow University on the 14th of October. St. Mirren will next play on the 13th of October when they host Sony Centre Fury.