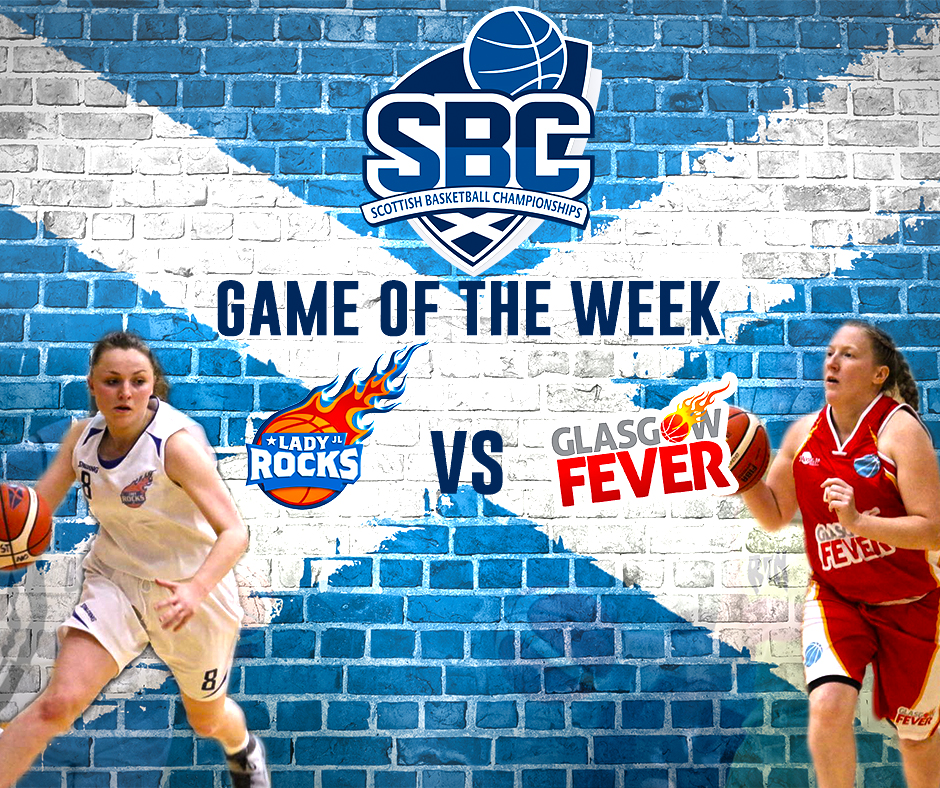 On Friday night, basketballscotland’s Game of the Week team were in attendance at the first game of the Women’s SBC season as the Lady Rocks hosted Glasgow Fever at St Maurice’s High School.

Lady Rocks came into the 2017/18 season after finishing 4th in the Premier division last season, whilst Glasgow Fever finished joint 3rd in Division 1. Fever came into the game as the underdogs and would struggle against a strong Rocks side, falling to the home side 64-49 in their season opener.

With both teams toting a number of younger players to mix with their seasoned veterans, the game began with Rocks running a line-up of Cathy Mitchell, Lisa Haldane, Rhona Mitchell, Erin Gilbride and Nadelle Strain, whilst Glasgow Fever went for a starting five of Julie Duff, Khera Ross, Suzanne Burns, Rosanne Barr and Stephanie McGowan.

After Fever won tip, it was Erin Gilbride who would get it going for the Rocks, as she sank a three-pointer and on the next possession finished on a fast break layup, giving Rocks an early 5-0 lead. Fever’s Center, Rosanne Barr put the first points on the board for her team, as she got the ball off just before the shot-clock expired, to miss and corral her own rebound and then get fouled, sending her to the line where she knocked down both free-throws to trim the score to 6-2.

Both teams were struggling to score early on in the game as they both moved the ball well and the open shots were there for the taking, but couldn’t be capitalised upon. Rocks began to find their groove later in the first quarter, as Rhona Mitchell made a deep two-pointer from the top of the arc, followed by sister Cathy Mitchell making a jumper of her own to give the Rocks their first double-digit lead of the night at 15-4. Rocks youngster Maela Faleu then made her own contribution, as she received the ball at the top of the three-point line, faked her defender and drove into the paint for the high floater off the backboard.

Fever were not going away without a fight however, as Rosanne Barr found herself doubled in the post. Looking like she was trapped, she somehow managed to find Kirsty Anne Semple on the opposite wing who knocked down the open jumper to trim Rocks’ lead back to single digits at 17-8.

Turnovers would hurt Fever in the first quarter, as Rocks played a frenetic style of defence and Fever struggled to keep a hold of the ball. Rocks took advantage by converting on the fast break, allowing them to build a sizeable lead in the first quarter.

“We turned the ball over far too much and that hurt us,” said Fever coach, Stacey Macdonald after the game, “Credit to Rocks, as their aggressiveness and intensity stopped us getting into any real rhythm with our offence.”

As the first quarter came to a close, the Lady Rocks were up 24-8.

In the second quarter, Fever’s Kirsty Anne Semple would strike first, receiving a pass from Suzanne Burns for the jumper. Lisa Haldane would answer back on the other end for the Rocks, pulling up for a two-pointer and extending Rocks lead to 26-10.

Rocks came out with more of the same in the second, moving the ball really well and breaking down Fever’s defence to free up space for easy shots. Fever stayed with the Rocks however, as they revelled at getting to the line and knocking down their free throws. Rachel Simpson scored 5 straight points for Fever in the second, as she was fouled on a made shot inside, followed by a drive from the corner where she finished a layup. With the clock running down, Kirsty Anne Semple beat her defender off the dribble and pulled up for the jumper, scoring the final basket of the half.

Fever outscored the Rocks 11-8 in the second period, but Rocks were still ahead as both teams went to the locker room with the score 33-19 in favour of the home side.

Coming out of the break, both teams seemed to lock down the paint in the second half, forcing both sides to resort to shoot it from deep. Rocks kept moving the ball well but their shots weren’t falling. Fortunately for them, Fever were struggling to grab their own rebounds, allowing Rocks to claim a number of second-chance possessions. Turnovers continued to haunt Fever, as they kept giving up the ball and weren’t able to set up their offence.

Fever would again hit first in the third, as Semple found Stephanie Mcgowan on the wing who pulled up from three and converted. After Cathy Mitchell made a contested three-pointer in the face of her defender, Rocks proceeded to go on 13-2 run in the third. Erin Gilbride was tenacious in the third for the Rocks, as she found her teammates on cuts to the basket and guided the team’s offense.

After period of relative silence on the scoring front as both teams went up and down the court, Rocks’ Nadelle Strain would end the scoring drought as she made a three from the top of the arc. Erin Gilbride would then hit again for the Rocks, converting a deep three-pointer to extend Rock’s lead to 42-24. Carla Coll made her presence felt for the Rocks in the third, finding Elise Wylie in the corner for the three, and then after she made a jumper from the block, she found herself with a mismatch over the smaller Semple, making a turnaround jumper to increase the lead even further at 49-24. With time winding down, Maela Faleu drove into the paint and made the floater off the glass just before the clock expired, putting the score up to 51-26 going into the fourth quarter.

Fever had quite the task ahead of them as the final period began and they came out all guns blazing. After Cathy Mitchell and Maela Faleu put the first six points on the board for Rocks, Fever went on a 23-7 run to close out the quarter as a number of player began to find their groove and knock down shots. Julie Duff scored 5 points in the final quarter, as well as finding Semple for the jumper and her final basket of the night.

Unfortunately for Fever, it was a case of too little too late. Despite outscoring Rocks 23-13in the last quarter, Rocks kept control of the game and closed it out at 64-49.

basketballscotland spoke with Lady Rocks Coach, Colin Haldane after the game who had the following to say about his team’s performance and what they need to do going forward:

“The girls trained hard at the beginning of the year, they were fit, they liked to move the ball well in the first half, we had some new players and they took a while to bed in.”

“The first half I was very pleased with. The second half we began to slow up a wee bit, so a wee bit disappointing in the end but credit to Fever, they tried to shoot their way out of it – and nearly did, so you know, we’ve got something to work on next week.”

“Going into the next game, we need to work on a wee bit of patience on offense, in the second half we were just rushing things and trying to make things happen without moving well enough but I think we’ll do that next week.”

The Lady Rocks will face Edinburgh University away in their next matchup on the 16th September. Glasgow Fever will also travel away to play St. Mirren on the 17th September.