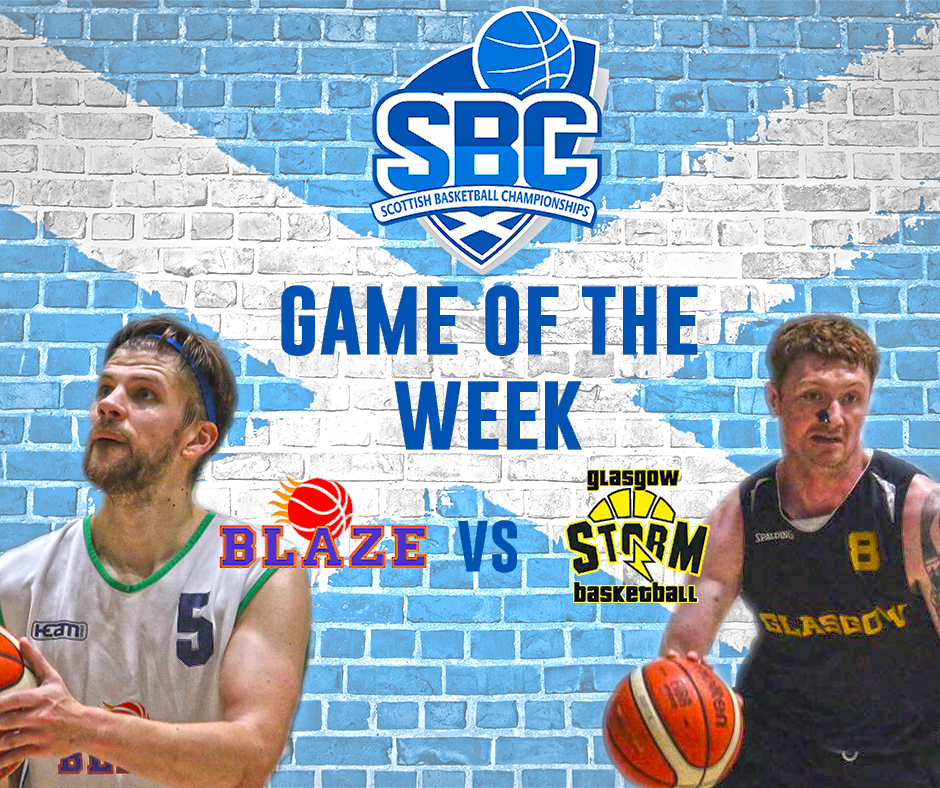 On Friday night, basketballscotland’s Game of the Week took place at The Crags as Boroughmuir Blaze played host to Glasow Storm in the Men’s SBC, a game in which Blaze came away as the victors, winning 95-63 at home.

Boroughmuir Blaze came into Friday’s game having won their first game of the SBC season, defeating Pleasance BC 93-53 at home in the inaugural game of the season. Glasgow Storm on the other hand, entered this fixture having lost their one and only game of the season to first place Sony Centre Fury, losing 84-65 in Grangemouth.

After they won tip, Glasgow Storm hit quickly coming out of the gate, as Steven Murdoch received a feed from Alexander Garthwaite and knocked down the first jumper of the game over Mateuz Kruczyñski. Blaze answered back straight away, after a high screen and pop allowed Jordan Green to find Lewis Crofts who knocked down a bank shot to tie the game.

Early in the game, Storm played a fast-paced offence, driving into the lane and drawing in the Blaze defence, then looking for the quick shot from the wing. This worked in their favour in the first quarter, as Murdoch drove into the paint and kicked it out to Ali Salimy who hit a jumper to give the team the lead once again.

It took Blaze a bit of time to settle into their offence, as Storm’s aggressive zone defence proved to be difficult to crack, forcing a couple of shot-clock violations early on in the game. After John Browne missed a corner three after some good ball movement from Blaze, Storm captain, Calum Bryson corralled the rebound and chucked the ball up court, finding Michael Travers on the fast break as he cut to the basket and drove in for the finish, giving Storm a 6-2 lead.

Blaze seemed to find their footing on offense from that point on, as on the next possession they moved the ball well and eventually found Jordan Green who hit a three-pointer to trim Storms lead to 1. Murdoch then made another jumper for Storm as he beat his defender off the dribble. This was then followed by Garthwaite driving baseline on the next possession and making the contested layup over two defenders to extend Storm’s lead to 10-6.

Storm’s lead in the game would be relatively short-lived however, as Blaze guards John Browne and Sam Stott proceeded to take over the rest of the first quarter, combining for 15 points on 5 three-pointers in the period. Despite this, Steven Murdoch continued to keep Storm in the game, scoring 8 of his 18 points for the game in the first. Storm were also great at getting out on the break, collecting a number of fast break points before Blaze could set their defense. As the first quarter came to a close, Blaze narrowly led Storm 26-23.

In the second quarter, Blaze would look to capitalise on the solid play they began to find towards the end of the previous quarter as they continued to unselfishly move the ball to find the best shot available. Lewis Crofts made the first basket of the quarter for Blaze, as Rodger Watt found him from the post, kicking it to the top of the arc for Crofts to knock down the three. Watt would then make his own impact felt, as he lost his defender and euro-stepped his way into the paint for the finger roll finish to extend the Blaze’s lead to 31-23.

Storm continued to play their up-tempo style of play, looking for the quick shot in the half court set and getting out on the break. An excellent piece of ball movement ultimately found Kevin Scott, who pulled up and hit the first three-pointer of the quarter for Storm. Scott would then score the next 5 points for Storm, as he drove to block and pulled up for the jumper then became the reciprocate of a couple of foul calls, allowing him to add a few free throws to his points tally.

The quarter saw a period of relative silence on the scoring front, as Storm began to get better at closing out the Blaze shooters, meaning they had to look for the shot inside. Meanwhile, Blaze elected to lock down the paint, forcing Storm to take low-efficiency shots from outside.

Blaze then began to find their shooting touch later in the quarter, as more good ball movement found Green in the corner who knocked down a three-pointer to bring the score to 41-33 in favour of Boroughmuir. Eoghann Dover then came close to making the play of the night, as he drove into the paint and passed it behind his head to a cutting Kruczyñski who was fouled on his way to the bucket. Kruczyñski then knocked down two free throws to give Blaze their first double-digit lead of the evening.

With Storm struggling from the field, Murdoch stayed consistent, scoring the last 6 points of the half for his team. Sam Stott added a couple more three-pointers to round out the quarter as both teams went back to the locker room at the end of the half with the score at 49-37 to the home side.

As both teams came out of the break, the energy that we saw from Storm in the first half unfortunately did not carry over into the second, allowing Blaze to take control of the game. Blaze ran a high press early in the second half which exhausted Storm’s guards, forcing turnovers which led to a number of fast break points on the other end. Storm continued to shoot poorly throughout the half as fatigue set in and the shots weren’t falling.

“We are beginning to piece things together, working hard to move the ball and get more people involved. We missed far too many layups tonight – it must be in double figures – it’s a concentration thing, and I’m pretty sure we’ll improve by next weekend.” Said Storm Coach, Iain Maclean, speaking with basketballscotland after the game.

Blaze continued to play well as a team, as Eoghann Dover ran the point, finding Green, Browne and Stott for a number of shots from deep. Watt and Kruczyñski would continue to make an impact inside, grabbing a number of offensive rebounds which leading to second chance points.

When asked what the major factors were in Blaze’s win, “our defensive intensity and our ball movement.” Was Captain Eoghann Dover’s response, “I think by being unselfish and with the quickness we have at the guard position meant we really managed to capitalise on that”

Going into the final quarter, Blaze were up 65-48 over Storm. They would then go on to score another 30 points before the end of the game. Sam Stott caught fire in the fourth quarter, scoring 15 of his 27 points for the night and further extending the Edinburgh side’s lead as the game entered the last few minutes. Blaze youngster, Jordan Burke came into the game in the dying minutes of the game and knocked down his only shot attempt of the night – a three-pointer. This would be the final basket of the match as the game ended 95-63.

Along with Sam Stotts’ 27 points, Jordan Green added 22 and John Browne had 16 for Blaze. Steven Murdoch lead the way for Storm with 18 points.

Eoghann Dover had the following to say about what the team needed to improve upon in the run up to their next game: “Going into the next game, we just need to work on consistency, sometimes we just go through the motions when we’re running our offense rather than reading what’s in front of us. So I think just getting sharper and becoming better as a team.”

In Boroughmuir’s next fixture, they will travel away to Dunfermline Reign on the 23 September, whilst Glasgow Storm will host Pleasance on the same day.