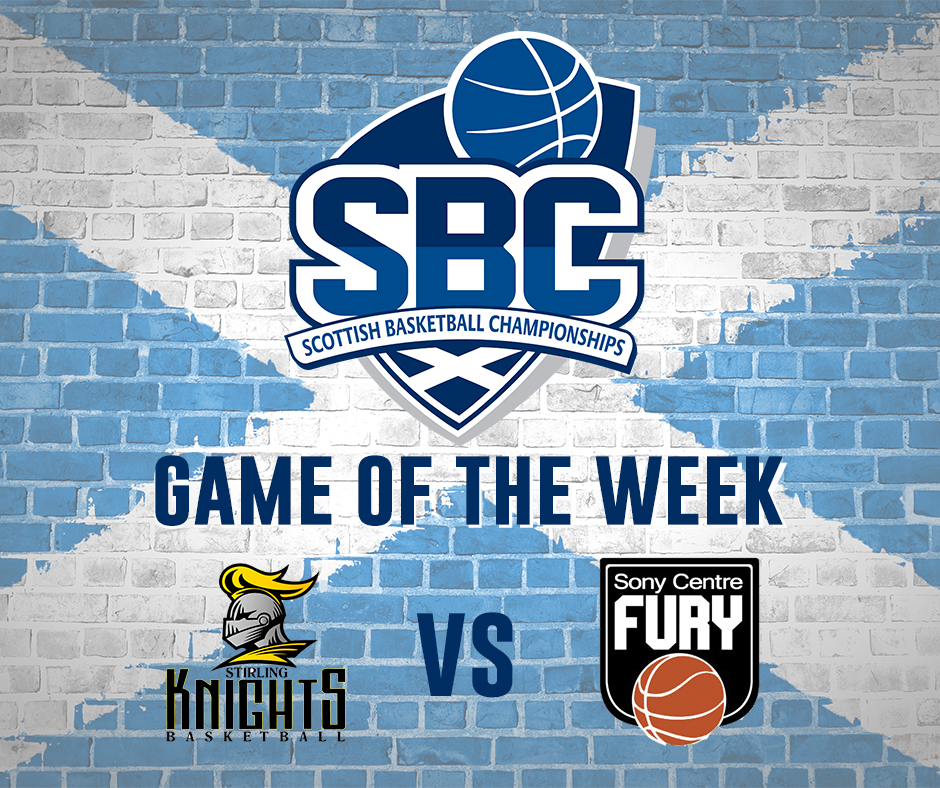 This week, Game of the Week will be travelling to the Peak, Stirling to watch the first central belt derby of the season, as Stirling Knights will play host to Sony Centre Fury.

The hosts, Stirling Knights come into Friday’s game after a promising start to the season. Despite only winning one out of three league games so far, Knights have shown that they can match up with some of the league’s top competition; narrowly losing 83-77 to 3rd place St. Mirren last week as well as coming back from being down 17 at halftime against Edinburgh University to win by 12 in their first game of the season. Young star, Shaun Craig has been leading the way for Knights, averaging 22 points through the team’s first two games whilst also shooting a steady 39% from three-point range.

“We are the youngest squad in the League but we have proven so far we can hold our own.” Said Knights captain, Daniel Chok, “This is a fixture that always attracts attention so we just want to go out and play hard and hopefully show we are doing the right things. We could just as easily be sitting undefeated which is frustrating but it’s really about growing and improving each game that we play.”

Ahead of the game, we also caught up with Knights coach, Cory McCabe who had the following to say about his team going into Friday’s game;

“We are very happy with the progress of our Senior Men’s team this season. We produced a fantastic comeback versus Edinburgh University and ran both the Kings and St Mirren close. We are far better offensively than we have ever been and I’m confident we can really push on with some big performances this season.”

“Fury are the benchmark in the League and we know exactly how difficult this game will be. Their strength lies behind the three-point line so we know they will come out firing.”

Sony Centre Fury have had a solid start to the season, going 3-0 against Glasgow University, Glasgow Storm and Dunfermline Reign. With a team relatively unchanged from last season, Adam Hammerschmidt and Eddy Leginas have been the teams standout performers, each averaging 18 and 17 points respectively over the teams first few games.

We spoke with Fury coach, John Bunyan ahead of Friday’s game who had the following to say about the fixture;

“The Knights had a very good result against St.Mirren and we know they can put points up quickly. We had a solid performance against Glasgow Rocks pro team on Sunday with an outstanding performance from Eddy Leginus, hitting 27 personal. While we were clearly seen as very much a 3pt shooting team last season, I would like to think we have strengths in all areas with the biggest factor being, we do not rely on one player to get results. The team are very focused on repeating our successes of last season and we are looking forward to what should be a great game against many of our former players in the Knights side “.

“It is still early in the season and I think as a team we are still looking to find a level of consistency and performance that we are happy with. It is great to be 3 and 0 but we know we have to keep working hard together as a team to get back to the level we were at last year. I am sure Friday will be a tough game and one everyone is looking forward to.”

Stirling Knights will host Falkirk Fury this Friday 22nd September at the Peak, Stirling with tip off at 7.40pm

If you’re at the game, let us know by tweeting us @basketballscot and using the #SBCGotW