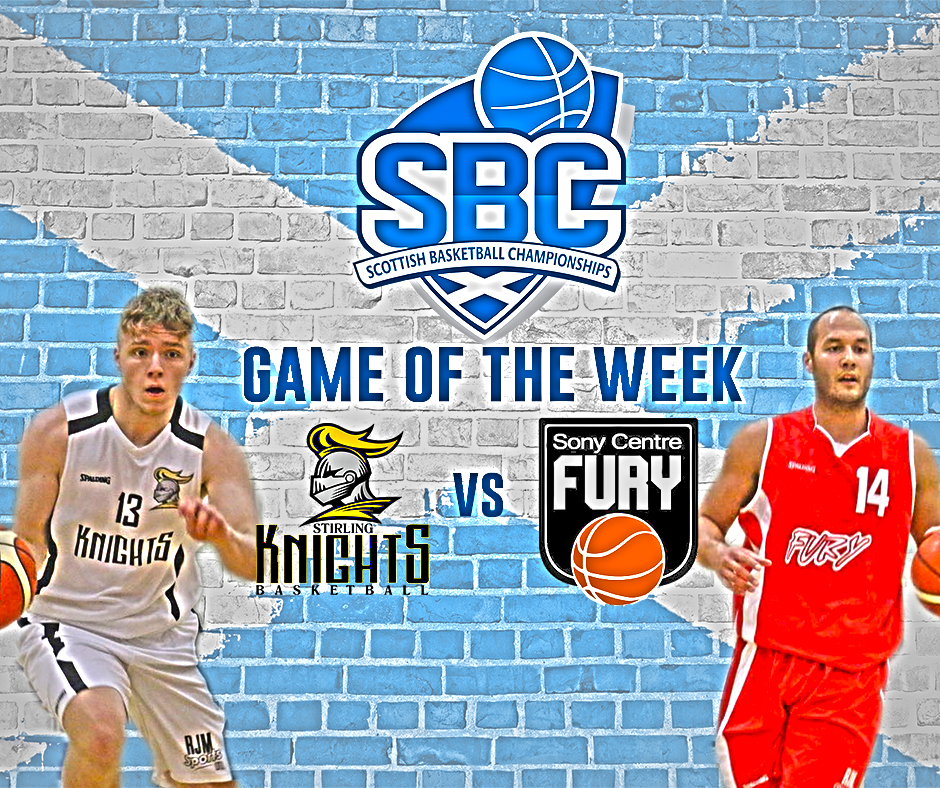 This week, the Game of the Week team was in attendance at the Peak, Stirling to witness Stirling Knights host Sony Centre Fury in the first central belt derby of the year. Fury came away as the victors, after defeating Knights 95-63.

First place Fury came into Friday’s fixture in the midst of an unbeaten run, having handed losses to Glasgow University, Glasgow University and Dunfermline Reign already this season. Knights on the other hand, came into the game 1-2, having defeated Edinburgh University but then falling to City of Edinburgh and St. Mirren later in the season.

Just 10 minutes away from tip-off here in #SBCGotW.

After Fury won tip-off, it was Ross Gibson who would put the first points on the board for Fury, somehow finding the basket for the score after being double-teamed in the post. Knights captain, Daniel Chok was the first to answer back for his team, as he received the pass in the corner, drove baseline and was fouled on his way to the basket, knocking down two free-throws to tie the game. On the next possession, Chok again drove past his defender and finished the layup to give Knights their first and only lead of the evening. Fury were quick to reply, as Eddie Leginas drove along the baseline and missed on the reverse layup attempt. The ball was then rebounded by Keith Bunyan at the top of arc, who pulled up and sank the three-pointer, giving Fury the lead once again at 5-4.

Without the usual interior presence of Matthew Dick, Knights really struggled inside against Fury’s stronger players. Once Adam Hammershmidt got into the lane, there was very little Knights could do to stop him, allowing him to collect 10 points off inside looks in just the first half alone. Similarly, as Knights struggled to grab their own rebounds, Fury took full advantage, scoring a number of second-chance baskets as a result of their excellent offensive rebounding.

“I’d like to think with this side, we’re missing players but at the same time other players can step up,” said Knights coach, Cory McCabe, “But tonight it was just really a mile off the pace. In my perspective, it’s a learning curve. Every games a learning curve.”

Midway through the first quarter, Fury went on a 8-0 run as Leginas, Hammerschmidt and Gibson all added to their points tally. Connor Rankin would the relinquish Knights’ scoring drought as Shaun Craig found him in the corner for the three-pointer to bring the score back to 13-7. From that point, Knights began to find their footing on offense, as Chok took the ball inside for finish in contact, followed by Shaun Craig pulling down a rebound and going coast-to-coast for the finish. Craig then hit again for Knights, sinking a three-pointer that would trim Fury’s lead to 16-14.

Fury were not letting up however, as they continued their stellar play throughout the remainder of the first quarter. Eddie Leginas began to take over for Fury, as on two separate occasions, he lost his defender and knocked down the long jumper. An ensuing inbounds play then found Hammerschmidt under the basket for the easy deuce. As the first period came to a close, Fury were up 24-14 over Knights.

Fury continued to be hard to handle inside, as Hammerschmidt and Gibson continued to take advantage of the size mismatches they saw in the first quarter. Leginas and Bunyan continued to be influential in Fury’s lead, both posing a legitimate threat from outside once the defense had been dragged inside to pick up Fury’s forwards.

Despite at one point trimming Fury’s lead to 4 points after Daniel Chok found Shaun Craig on the fast break, Knights could not sustain their momentum and Fury woud go on a 27-13 run to close out the half. Fury clamped down on Knight’s shooters towards the end of the quarter, preventing the shooting of Rankin and Craig that had made such an impact in the first quarter. Rankin made a couple of three’s towards the end of the quarter, but Fury were always quick to reply, as Bunyan and Leginas both made three-pointers of their own on the following possesions. In the dying seconds of the first half, Leginas had one of the plays of the evening, splitting the defence and sailing in for the layup, putting Fury up 55-37 as both teams went back to the locker room.

Coming out of the break, it was more of the same from Fury, withstanding the same energy that we saw in the first half as the whole team got in on the action. Early in the second half, there was an enthralling sequence in which the game went back-to-back on numerous possesions. As Fury put points on the board, with Gibson, Hammerschmidt and Leginas all adding to their tally, Shaun Craig was Knights’ lone bright spark, scoring 9 straight points for his team in the third. Connor Martin saw some increased minutes for Fury in the second half, scoring 12 points and hitting a buzzer-beater at the end of the third to extend Fury’s lead to 76-54.

With Fury still holding a resounding lead over the home team as the game went into the final quarter, both teams used it as an opportunity to give some minutes to their role players. Knights’ youngsters, Lewis Sullivan and Lucas Hamill both saw some playing time in the fourth and did not disappoint, with Hamill making his presence felt inside and Sullivan relentlessly attacking the basket despite the older and stronger competition. Ben Chok and Jordan Ferguson also got themselves on the scoresheet as the game edged towards its end, scoring inside on shots from the post and picking up baskets on the offensive glass. Martin scored the final basket of the game, as he picked up a loose ball and knocked down a three-pointer to end the game with Fury the victors, 95-63.

Shaun Craig was the leading scorer for Knights, finishing with 21 points for the evening. Adam Hammerschmidt also had 21 points for Fury, Eddie Leginas had 20 points and Keith Bunyan had 18 points.

Some 📸’s from last night’s #SBCGotW between Stirling Knights and Sony Centre Fury.

We spoke with Fury coach, John Bunyan after the game, who had the following to say about his teams performance;

“We were up 20 going into the third quarter, but theres a lot of things defensively that we need to tighten up on, we’re always putting points on the board because we’ve got a strong offensive unit. In general terms, we’re always looking to be adjusting as the game progresses and I think we did that reasonably well in the second half so much so that in the fourth quarter we managed to give everyone a reasonable run.”

We also got a chance to speak with Cory McCabe at the end of the game, who had the following to say about Knights’ performance and what they need to work on going into their next fixture

“Probably our poorest performance this season, I felt we just didn’t come out with any intensity and that’s something I’ve been challenging the players on all week. Credit to Fury they came out, they executed. They’ve probably had their struggles this season so far from behind the three-point line, but tonight they had it going.”

“(the next game) really gives us an opportunity to get back to basics, get the motion ticking over again, and its just more a case of regrouping this week I think, taking a little bit of stock, we’ve had a difficult first few games, but the progress is there.”

In Fury’s next game they will travel away to Dunfermline Reign in the first set of Scottish Cup matchups. Meanwhile, Stirling Knights will also travel away, heading north to play Highland Bears.