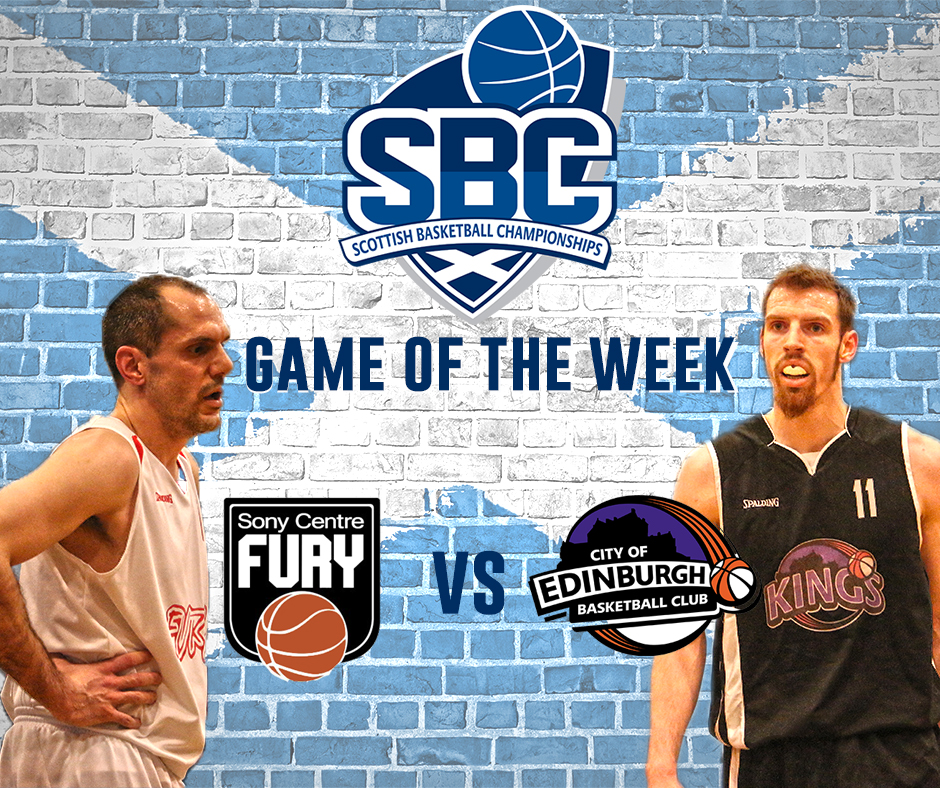 This week, we were in Grangemouth for the semi-final of the Scottish cup where Sony Centre Fury faced off against City of Edinburgh Kings. Kings advanced to the Final after edging out the home side 64-63.

In Fury’s run to the semi-final they edged out Dunfermline Reign 96-91 as well as comfortably defeating Glasgow Storm 75-44 in the quarter finals whilst Kings defeated Ayshire Tornadoes 90-65 and upset top of the league side, St. Mirren in the quarter final.

After the game tipped off and both teams settled into the flow of the game it was Kings’ center Ali MacKay who would strike first in the contest after he was found under the basket by Calum Nicol. Eddy Leginas then replied on the other end for Fury as Adam Hammerschmidt drove to the basket and dished it to him in the corner for the three-pointer.

Kings played well on both sides of the floor for the majority of the first quarter as they effectively closed out Fury’s shooters by switching on the perimeter and shut down their threat from outside. Meanwhile, Kings played very well in the half court set and grabbed a number of offensive boards leading to second chance possessions. Kyle Jimenez scored 5 straight points in the quarter as some good ball movement by Kings freed up space for him to drive inside for the finish, and then followed it up with a contested three over his defednder to give Kings a 11-9 lead.

Kings then proceeded to go on an 8-2 run to round out the quarter as Paddy Campbell made a three from the corner, Ryan Armour got past his man and drove in for the finish and Calum Nicol topped it off with an And-1 finish inside after faking out his defender to give Kings a 19-11 lead at the end of the first quarter.

Early in the second quarter, Kyle Jimenez finished insde with a nice reverse layup to give Kings their first double-digit lead of the game. However, Eddy Leginas quickly followed it up by hitting two consecutive three pointers to cut into the away team’s lead. Nevertheless, the momentum from the first quarter clearly carried over for Kings as they kept Fury at bay for the remainder of the half and went to the locker room with a 36-25 lead.

“We started the game on fire.” Said Kings’ Coach, Craig Nicol after the game, “Credit to our guys for executing the plan to a tee. I mean we really shut them down defensively – we kept them to 25 points at halftime.”

In the third, Kings’ would come out with more of the same and stretch their lead out even further. Neil Rowan scored 8 points in the quarter as he made his way inside for the tough contested layup in the lane and converted on two triples. It seemed as though Kings could not miss as every shot went their way. They kept up their proficient defence throughout the quarter, allowing them to outscore Fury 21-10 and round out the quarter with a resounding 57-35 lead.

Going into the final period, Fury had more than a difficult task on their hands. However, Fury are no strangers to late quarter comebacks, having completed a rout of Edinburgh University earlier in the season after being down 17 in the final period. After failing to score more than 20 points for the first three quarters, Fury would go on to outscore Kings 28-7 in the fourth quarter. At the beginning of the quarter, it was clear that Fury were trying to shoot their way out of the deficit as Keith Bunyan and Greg Foussas were both looking for the quick shot as soon as they were open. This worked to some avail as Bunyan, Leginas and Hammerschmidt hit three straight triples to trim Kings’s lead to 61-50 with 3 minutes left in the game.

Then, after Neil Rowan dropped in a tough floater in the lane, Hammerschmidt was quick to respond on the other end, as he was found open for the three-pointer on the wing, cutting King’s lead to just 10 points. Hammerschmidt then hit again, nailing a triple from the top of the arc which banked in off the glass to cut the score to single digits.

With no answer for Fury’s onslaught, Kings were complacent on the offensive side of the floor, committing a number of turnovers and forcing bad shots. All the while Fury continued to narrow the deficit as Greg Foussas was fouled, putting the away side into team fouls. With just 1 minute left in the game, Kornelijus Dauksas pulled down an offensive rebound and found Bunyan on the wing who knocked down the clutch three-pointer to make it a 3-point game at 63-60. Dauksas was then fouled on the fast break, sending him to the line where he knocked down one of his two free throws. After Kings failed to score on the next possession, Adam Hammerschmidt was subsequently fouled, sending him to the line where he knocked down both free throws, tying the game at 63 a-piece.

With 21 seconds left on the clock, Kings had possession. As the clock wound down they passed the ball around looking for the shot while Fury desperately looked for the stop. Then, much to the dismay of the home crowd, Ali MacKay was fouled in the act of shooting with just 1.2 seconds left, sending him to the line for two free throws. After missing his first shot, Mackay would knock down his second, putting Kings up 64-63. Coming out of a timeout, the ball came to Keith Bunyan who stepped back into a fadeaway jumper but couldn’t convert and Kings came away with the 64-63 victory in Grangemouth, securing their place in the SBC Cup Final.

Despite rallying back from a 22-point deficit, it's not enough for @Furybball1 as @EdinburghBBall take the win in this week's #SBCGotW and advance to the Finals of the Scottish Cup! pic.twitter.com/iYwuP3ruYi

We caught up with Fury coach, John Bunyan after the game who had the following to say about his team’s performance;

“Great effort, you know we didn’t play particularly well, they took advantage of that and full credit to them they moved the ball well, it wasn’t an overly high scoring game obviously and defences at both stages were played pretty well, while we were scoring 20 odd points to come back we were playing some good defence at the same time, putting pressure on them but that’s what basketball’s all about, its games of runs and momentum, they had it for probably the majority of the game and we had it at the end.”

Despite his team’s win, Craig Nicol knew what it was that his team needed to work on in the run up to the Final;

“We’ve got to put together a 40-minute performance. That was the closest we’ve got today, we’ve been really good in spells this season, I’d say we’re one of the best teams around but we’ve got to get more consistent in closing games out a little bit better, I mean that should have been comfortable.”

City of Edinburgh Kings will now go on to face Boroughmuir Blaze in the SBC Cup Final after defeating Pleasance BC 92-64 in the other semi-final.