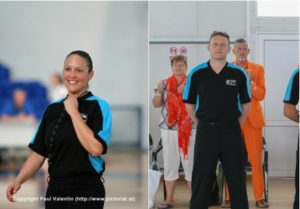 basketballscotland would like to recognise and congratulate the performances of Mariann Dodds-Miklosik and Graham Shaw after they took charge of the BBL and WBBL Cup Finals respectively, which took place last weekend

The two Game callers who feature regularly in the BBL, WBBL and SBC represented themselves and Scottish Officiating admirably.

Both will also take charge of SBC Cup Finals this weekend along with 15 other SBC referees who have worked tirelessly in the first half of the season to be rewarded with the honour of officiating the Scottish Cup Finals.

You can catch up on Mariann and Graham’s performances in the Britsh Cups on the BBC iPlayer by clicking on the links below:

For more information about getting into refereeing contact officials@basketball-scotland.com