basketballscotland are delighted to confirm Boštjan Nachbar, who played over 300 NBA games throughout his career, will be attending the Jr. NBA Final Fours event this Friday to support the finalists, answer questions and hand out awards to the participants.

Boštjan began his career in 1997, playing three seasons in his native Slovenian league. In 2000, he moved to Italy and played two seasons with Benneton Treviso before moving again, this time to the US to pursue a career in the NBA. Over the next six seasons, Boštjan represented Houston Rockets, New Orleans/Oklahoma City Hornets (now called New Orleans Pelicans) and New Jersey Nets (now Brooklyn Nets).

In 2008 Boštjan returned to Europe and played for several teams across Russia, Turkey, Germany and Spain. Over the course of his career, Boštjan won a trophy in every country he played. Internationally, he represented Slovenia at two FIBA World Championships and participated at four European Championships.

Amy Kirkhouse, Executive Officer for Education and Development at basketballscotland, is thrilled to have an NBA player attending the event for a second year:

“It’s brilliant for all the kids involved to have a former NBA player coming along to offer support. We had Vladimir Radmanovic last year and that was a fantastic experience for all the players, so it’s really exciting to be able to have a professional player there again to share the day with them. Boštjan had an incredible career and the young players will all be able to learn from that.”

The Final Fours event takes place at the Emirates Arena this Friday. Look out for a preview coming tomorrow with more on each finalist! 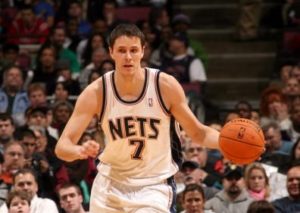