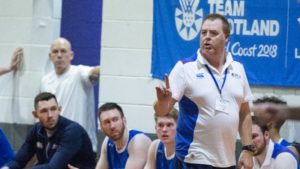 Rob Beveridge, known throughout basketball as Bevo,  has been appointed as Head Coach of the Australian Men’s team for this summer’s World university Games. The games will be held in Italy from the 3rd to 14th of July.

Bevo takes a wealth of experience from down under into the role, having previous coached West Sydney, Perth and Illawarra in the NBL. He was also responsible for guiding the Australian Emus to a historic gold medal at the 2003 Under 19 World Championships.

Most recently Bevo led Scotland to an impressive fourth-placed at the 2018 Commonwealth Games, which of course took place on the Gold Coast. The 2018 games was just the latest in a string of major events for Bevo, with the 2000 Paralympics, 2004 Olympics, 2006 World Championships and 2006 Commonwealth Games also listed on his resume.

“Bevo is a World Class Coach, it’s no surprise that the Aussies have appointed him to lead their next generation of players at the World Uni Games. His ability to connect with players and motivate them to achieve their potential sets him apart from his peers. We wish him well!”