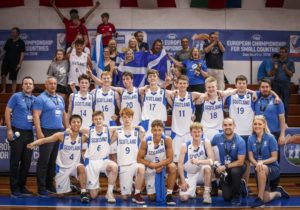 The players, who are representing ten Scottish clubs and one English clubs, will be hoping to impress Wood and his team over the next few months.

With the camp already well underway, the Head Coach is happy with what he has seen from the players:

“We have now had 10 days worth of practice and the players are buying in to what we are trying to achieve. The intensity of practice has been good, we have a lot to work on both technically and tactically to be able to compete for 41st place in Europe. We know it’ll be a challenge and there is a good chance we might not be the most talented team at this tournament so we are looking to play a style to best suit our talent.”

“We are looking forward to working together over the next period of training to see where we can get to as a squad.”

The squad will continue to build up their training schedule as preparations continue for July’s tournament. Tirana is the tournament’s location, with games set to be played between July 14th-21st. Scotland have been drawn into group B alongside Albania, Luxembourg, San Marino and Moldova.