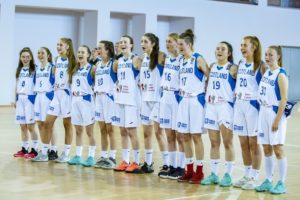 Eight clubs from across Scotland, and one from Spain, are being represented at the Scotland Women’s U16 National Squad training camp as Head Coach Donnie McDonald recently named his 21-woman squad.

The players gathered at Oriam last weekend for the first set of training sessions as the team looks ahead to this summer’s FIBA European Championships in Moldova. The team picked up a silver medal last summer and will be hoping to go one further and earn gold in 2019.

Donnie believes there is enough talent within the group to progress Scotland’s ranking in Europe:

“I’m really excited about the U16 women’s programme this year. The talent pool in this group is probably as deep as we have seen for a number of years and the players have shown a real desire to represent their country as well as possible. Obviously we need to be aware of our place world basketball – winning Division C this year would place us 41st out of 52 countries in Europe – but we have a group of players and staff that aspires to show that Scotland can compete at a level higher than that, which is fantastic.”

Whilst the 21 players gathered at Oriam to focus on Scotland, four players have also been selected for the GB training camp which takes place this week – something Donnie believes emphisises the level of competition for places in the Scotland roster:

“In this group, we also have had 4 players invited to the GB camp this week, which is double the number of Scots invited from last year and highlights that we do have a good talent level here in Scotland. Now our focus is on developing the best team we can and in the first weekend camp, the players have already shown how much they are willing to compete with each other to make that final team and that is great for Scottish basketball.”

The squad will continue to build up their training schedule as preparations continue for July’s tournament. The squad will travel to Moldova to compete from July 16th-21st. Scotland have been drawn into group B alongside Wales, Cyprus and Malta.