Tipping off in 41 days, the championships will be held across Latvia and Serbia as 16 teams compete for the FIBA Women’s EuroBasket crown. Held between June 27th and July 7th, the tournament also serves as a qualifier for the Women’s Olympic Pre-Qualifying Tournaments.

Great Britain will face Ukraine, Latvia and 2017 Champions Spain in the group stages of the tournament. All three games will be held at Arena Riga in Latvia.

The squad is made up of athletes playing across the world, with players representing clubs and colleges/universities from USA, Spain, Belgium, France, Poland, Italy and Great Britain. Two of the squad will also be taking time away from their WNBA clubs to feature at FIBA Women’s EuroBasket. 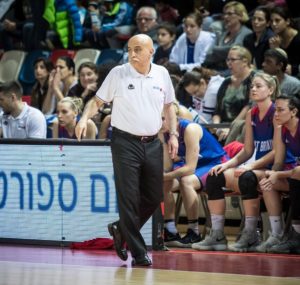 Head Coach Buceta realises that FIBA Women’s EuroBasket will be tough for the team but says the players are ready to do Britain proud:

“We qualified for FIBA Women’s EuroBasket after a very tough qualification group where only the winners qualified. Now we will do our best to compete at the highest level against the best teams in Europe. We know it is going to be difficult, but we will face it with ambition, courage, team attitude and self-confidence. These are values that have guided our women all the way through qualifying and I am sure they will make all of British basketball very proud. Our strategy will be to take it game by game, as that’s what we have done during qualification and it is what we need to do now.”

In the build-up to FIBA Women’s EuroBasket, the squad will compete at tournaments in Slovenia and Spain, as well as hosting Canada in a warmup game at Manchester’s Belle Vue Sports Village. Tickets for the game are available by clicking here.