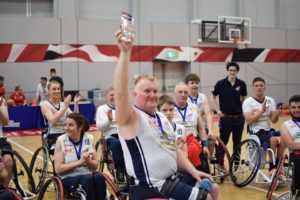 Scottish players and officials had a busy weekend in Sheffield as the BWB Championship Finals were held at the English Institute of Sport.

Scotland and GB international Robyn Love was in action with Oldham Owls as they collected silver medals in the Premier Division. Owls defeated London Titans 64 – 41 in the semi-final, with Robyn scoring 14 pts & 9 rebounds. In the final, Owls had a tough game against last year’s National Champions, Sheffield Steelers. The game, which saw Scottish Referees Carolyn Wilson & Chris McBrierty take to the floor, was televised live on BBC Sport, with the final score Sheffield Steelers 64 – 53 Oldham Owls.

Glasgow Rocks 1 battled relentlessly for a place in the Division 1 final but it was not to be as they were defeated by Exeter Otters 66 – 60. Scotland & GB U23 Ben Leitch was the top scorer in the game with 27 pts and 12 rebounds.  He wasn’t the only player to record a double-double, as James Beattie joined him with 16 pts & 13 rebounds.  The 3rd place game saw Rocks up against Celtic cousins NI Knights, with the Knights securing the win and bronze medal 55 – 38. Ben Leitch recorded his second double-double with 12 pts & 15 rebounds, whilst Beattie scored 20 pts to be named top scorer for a second game.

Glasgow Rocks 2 displayed great teamwork and determination as they defeated High Rollers 42 – 37 in the semi-final of Division 3. Veteran Paralympian Gary Davidson top scored with 16 pts & 7 rebounds, closely followed by Austin McKenzie with 15 pts & 6 rebounds.  With a place in the final secured, Rocks prepared to meet Birmingham Phoenix, and it was the Rocks team who were on fire securing the Division 3 title and promotion to Division 2, winning 56 – 44.  Gary Davidson was top scorer in the game with 18 pts & 6 assists, whilst Scotland juniors Ronnie Cassels and Austin McKenzie scored 14 pts & 13 rebounds and 13 pts & 6 rebounds respectively.

In what was a busy weekend for James Beattie, the Rocks player suited up for his junior league team, Lancaster Spinners, to play North Wales Knights in the Lord’s Taverners Junior League Finals.  Featured live on BBC Sport, the Final went right down to the wire with Knights victorious 60 – 57. Beattie was again top scorer with 28 pts, 13 rebounds & 6 assists, narrowly missing out on a triple-double.

A number of Scottish officials were invited to take charge of several games over the weekend. Chris McBrierty & Carolyn Wilson, both of who are IWBF qualified, were appointed to the Showcase Premier Division Final. Tom Stobo, basketballscotland’s appointments Officer for the SBC and a senior Tutor, officiated the Division 2 Final with Chris McBrierty & Carolyn Wilson. Lastly Garry Godsell, another regular face from both the SBC and BWB, took charge of the Division 3 Final.

Glasgow’s Coach, Jen Scally, is happy with how both teams performed over the weekend:

“Both Glasgow Rocks 1 and 2 represented the club well at the weekend. Rocks 1 had a tough weekend in some very competitive games, but I am confident that we will be a better team next year for those experiences. Rocks 2 battled through some nerves, and came together well to win the final. The development of the athletes this year has been astounding. A special mention has to go to the club committee in Bobby Park, David McWilliam, Gary Davidson and Peter Moore – without whom, this would not have been possible.”