Three Scots in GB U18 squads 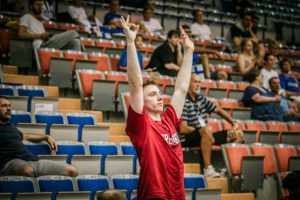 Three Scottish players have been called up to the GB Under 18 squads ahead of this summer’s European Championships.

Chris Feeney grew up playing youth basketball with BasketballPaisley, with Lewis McGlasson previously playing for Stirling Knights. The players both also represented Scotland U16’s at the European Championships in 2015/26.

The two players both currently play in England with Barking Abbey Crusaders and Mysercough College respectively. Whilst Feeney represented GB at the same event last year, McGlasson will be hoping to feature for the first time:

“It’s a huge honour to be selected for GB, it shows all the hard work I’ve put in so far is paying off, but there’s still a long way to go! My only focus this summer is making the 12 and go to Euros.”

Pollyanna Storie, who currently plays for WBBL side Caledonia Pride after growing up playing for City of Edinburgh, has previously represented GB U16 Women at the European Championships:

“It’s a huge honour to be selected for the initial GB camp. I am proud to be representing Scotland once again and I hope to make the final squad which will be going to the European Championships in July.”

Updates on the players’ progress will be provided via basketballscotland’s digital channels throughout the summer.