You are here: Home / Blog / Uncategorised / Wheelchair squads set for Worcester this weekend 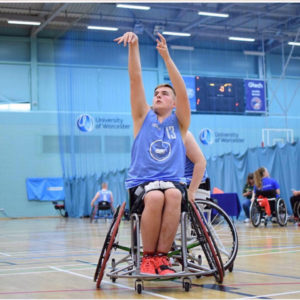 The U14 and U18 squads, led by Conor Smart and Jen Scally, will be competing at the University of Worchester Arena on Saturday 3rdand Sunday 4thof August.

Having finished 5that last year’s event, Scotland U14’s will be hoping to build on the result and push for a medal. The squad, which is listed fully below, is boosted by a number of players returning for another year of U14 competition. Charlie Redmond, Daniel McLaughlin, Shayne Humphries, Finlay Erskine and Owen Leitch will all be representing Scotland U14 once again.

Conor Smart spoke about the continued development of the U14 squad:

“The squad looks strong this year. We have a mix of players who have already seen action in the British Wheelchair Basketball Lord’s Taverners National Junior Championships and players new to the sport. It has been a privilege to see the more experienced players mentoring their new teammates, whilst still giving their best performances.

Our aim is to build on the improvements we made in 2018, focusing on tactical thinking and problem-solving during gameplay and in training. As always, the competition will be fierce, however, I have no doubt that our team will support each other when the going gets tough and give their very best on court.”

The U18 team, which picked up a silver medal last year, will be hoping for a repeat of their success and are boosted by players such as James Beattie, Adam Donnachie and current GB U22 player, Ben Leitch. Both Beattie and Leitch were part of the Glasgow Rollin Rocks team who advanced to the Division One Playoffs at the BWB National Championships last season.

Jen Scally, who coaches both Glasgow Rollin Rocks wheelchair national league teams alongside her role with Scotland, had the following to say about her squad:

“The Scotland U18 squad have been working hard to develop their fundamental skills and translate these skills into cohesive team play, in preparation for the British Wheelchair Basketball National Junior Championships. The game format (8-minute halves) leaves little time to settle into matches. We need to focus on preparing mentally and physically to start each game as we mean to go on. The team is excited to represent their country with pride and vigour.”

Having previously discussed the growth of wheelchair basketball in Scotland, basketballscotland’s Disability and Talent Pathways Manager, Tina Gordon, is hoping to see the players and staff achieve the results warranted from their efforts over the last 12 months:

“We have a real mix of experience and new players coming into the squads this year. Both the U14 and U18 squads have been training hard in their preparations for British Wheelchair Basketball’s ‘Lord’s Taverners National Junior Championships’.  As always, the championships will provide tough competition and I’m excited to see how our squads will showcase all the hard work they’ve been putting in over the past year.”

Chris Feeney and GB U18 Men claim 8th at FIBA U18 Europe
This site uses cookies: Find out more.
Scroll to top