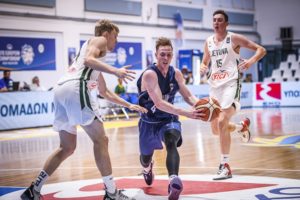 Scotland’s Chris Feeney and GB U18 Men recorded an 8th place finish at FIBA U18 Europe in Greece last week.

In the Round of 16, GB picked up a comfortable 77-62 victory against Montenegro, earning a spot in the quarter-finals.

Slovenia awaited in the last eight, and they proved too much for GB as they recorded a 71-57 victory to progress to the semi and leave GB to battle for 5th-8th.

The classification games were just as tough for GB, with France awaiting in the first game. An 81-52 defeat followed, and an 88-70 defeat to Lithuania in the second game confirmed 8th for Coach Keane’s team.

Former St Mirren player Chris Feeney averaged 19 minutes per game throughout the tournament, picking up his tournament best 10 points and 8 rebounds v Turkey, plus a high of 4 assists v Montenegro.