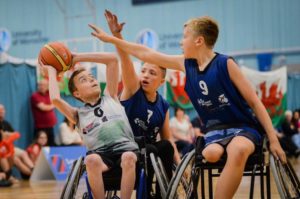 Scotland U14 Wheelchair basketball team picked up a silver medal over the weekend at the Lord’s Taverners Junior Championships in Worcester.

The team suffered a loss in their opening game, 11-18 to the Midlands, but this was the only upset on their way to Sunday’s final. A 26-13 win vs North East was followed by a 2-19 win against the South East on Saturday morning.

In the afternoon the team collected two more wins, 2-12 win v Wales and 27-7 v Yorkshire, to book their place in Sunday morning’s semi-final.

The team faced Wales again, having come out on top in the same fixture the previous day, and repeated that achievement with a 15-2 victory to guarantee themselves a medal and a space in the final.

Midlands awaited in the final, having won their semi-final v North East 24-6, and they proved too much for the Scottish team as they fell 22-13.

Despite missing out on gold, it was a successful tournament for the team who achieved their goal of improving on last year’s tournament where they finished 5th. Head Coach Conor Smart was full of pride after collecting silver:

“I couldn’t be prouder of the squad. They gave everything they had in the face of tough opposition. I’m really pleased to come home with a silver medal and am looking forward to returning next year.”