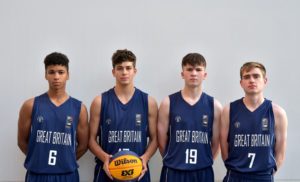 The Men’s team, which included Scotland’s Owen Mackle and Louis Sullivan, were drawn into Group B against Serbia, Netherlands and Spain. The top two from each group qualified for the Europe Cup, whilst also progressing to a semi-final.

The team started strongly, narrowly missing out against the Netherlands (11-14), before giving Serbia – who ended the weekend second overall – a run for their money, eventually falling short 15-21.

The team played just once on the Sunday, losing 6-21 to Spain, who topped the group with a perfect three wins from three.

Despite the challenging games, Coach Gareth Murray hopes the experience will have inspired the players to progress in the coming season:

“The weekend was great and it was an eye opening experience for the players. It showed the style of play and physicality in 3×3 basketball. All the teams they came up against had great fundamentals and showed a different level of physicality and skill level that they hadn’t played against before. With them still U18 this season, I hope this motivates them and challenges them physically and mentally to become better players.”