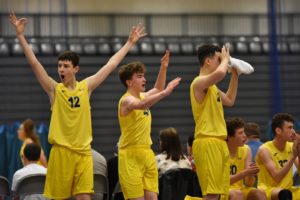 basketballscotland’s two U14 National Academy teams had a busy two days of basketball at the first Humphrey Long Invitational, which was held at the National Basketball Performance Centre in Manchester.

The teams, made up of more than 40 players who took part in the Regional Academies throughout the last 12 months, faced two England teams, as well as an Aspire select. Both the boys and girls were split into two teams, Scotland Royal and Scotland Yellow, for the tournament.

It was a tough weekend for the teams as they played a busy schedule against the best young players in England, however basketballscotland’s Barry Lang believes it was a good learning experience for the young players:

“Working with our colleagues in England, we’ve provided U14 players with an excellent learning environment. With the support of our volunteer coaching staff I believe we’ve introduced our young players to a level of competition, intensity and accountability that they’ve not experienced before. The spirit and character displayed by our players against a talented group of English players made us very proud.

The scoreboard only tells part of the story. For those of us who were in the Performance Centre we witnessed great progress and teamwork. Our focus was on our talent behaviours and we saw that in abundance. The players and coaches are better today than they were at the start of the competition, that was our aim and we achieved that.

Overall it was a great experience and I’d like to thank our players’ parents and Basketball England for their support.”

“The memory of one of our all-time great youth coaches was definitely honoured over the two days. Humph was an entertainer, and a teacher. As a coach he would have really appreciated the standard and competitive nature of the tournament’s games. Having the best young players from Scotland and England on the same court has continued to strengthen our basketball relationship and offered our players a huge opportunity to grow together as well.”

SBC Scottish Cup Draw: U18 & U16
This site uses cookies: Find out more.
Scroll to top