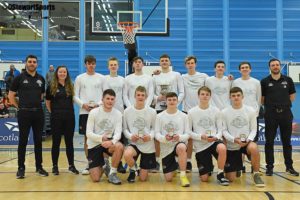 The draw for the U18 and U16 SBC Scottish Cup was made alongside the Senior draw last week as the 2019/20 SBC season edges closer.

The U18 Men’s division will see one prelim game – Ayrshire Tornadoes v West Edinburgh Warriors – ahead of the Round of 16. Reigning champions City of Edinburgh will begin the defence of their trophy against Grampian Flyers.

In the U18 Women’s Cup, City of Edinburgh will play Glasgow City in the only Round of 16 game to determine who faces Sony Centre Fury in the quarter-finals. West Lothian Wolves, the current holders, face St Mirren in their opening fixture.

The U16 Men all begin in the Round of 16, with the exception of St Mirren who received a bye in the draw. Stirling Knights, who picked up the SBC Scottish Cup as part of a domestic treble, will welcome Inverness City to Stirling in their first game.

Lastly, the U16 Women will have two Round of 16 games – City of Edinburgh v Attack Basketball Academy or Boroughmuir Blaze v Highland Bears – with the respective winners facing each other in the quarter-final. Perth Phoenix also lifted the trophy as part of a 2018/19 treble and they begin their defence at home to Sony Centre Fury.