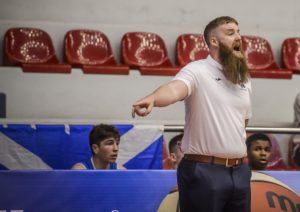 With just two weeks until the 2019 basketballscotland #RiseNow coaching summit takes place, more speakers for the event have been confirmed.

Both of Scotland’s U16 Youth National Coaches, Darryl Wood and Donnie Macdonald, will be speaking at the event, which takes place at West Calder High School on Saturday 24th of August.

Darryl Wood’s Scotland U16 Men finished fourth at FIBA U16 Europe in Tirana, narrowly missing out on the medals. Wood has a wealth of coaching experience, having previously held the role of Head Coach at BBL’s Glasgow Rocks, as well as recently taking up a new job as Coach Developer at basketballscotland.

Donnie Macdonald will also be speaking at #RiseNow, having recently guided Scotland U16 Women to a bronze medal at the female FIBA U16 Europe. Macdonald has also spent the last few seasons working with Caledonia Pride, Scotland’s WBBL side.

Tickets for the event are available now, priced at just £10. For more information and tickets, click here.