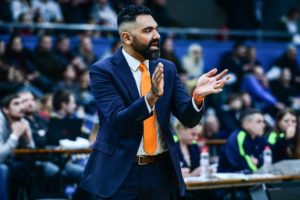 Speaking at West Calder High School next Saturday, Salem will be delivering on aggressive man-to-man defence and offensive spacing and decision making throughout the afternoon. The coaching summit will also see other speakers delivering, including both Scotland U16 Youth National Team coaches.

Salem is an experienced Coach, both in Europe and Internationally, and has had recent success with the Dutch national 3×3 sides – winning silver and bronze at the European Championships – as well as being the Head Coach for the Dutch National Academy for Women in Amsterdam.

Previous roles held in the DBL include Head Coach of Gasterra Flames Groningen, where he gained experience of coaching in the Euro Cup, as well as Head Coach of Apollo Amsterdam. Salem has also worked under Arik Shivek, one of Israel’s top Coaches.

basketballscotland’s Coach Developer, Darryl Wood, is excited for Scottish Coaches to have the chance to learn from an experienced international Coach:

“Last year’s Rise Now summit was a great success and I believe with Hakim coming in to speak to our Coaches, this year’s event will prove to be even more informative for those in attendance. Hakim’s CV speaks for itself, it’s great to have an internationally respected Coach coming to Scotland and I’m looking forward to getting an insight into his coaching methods.”

Tickets for the event are available for just £10 here.