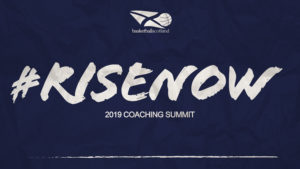 The full schedule for Saturday’s #RiseNow Coaching Summit has been released as build up to the event continue.

Attendees will benefit from a range of On Court and Off Court sessions at West Calder High School, with topics including the key principles and styles adopted by Scotland’s National Teams and a number of fundamental skills.

It was also confirmed last week that Netherlands Women’s Head Coach, Hakim Salem, will be the headline speaker on the day. Salem will be delivering on aggressive man-to-man defence and offensive spacing and decision making in two of the afternoon sessions.