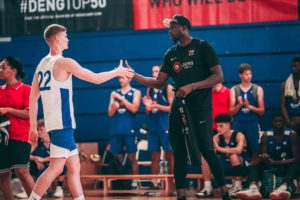 Three Scots were recognised among the best in the UK as they were invited to participate in Deng Camp 2019 last week.

Chris Feeney, Lewis McGlasson and Louis Sullivan were all invited to Deng Camp, a residential camp that invites the top 50 British players under the age of 19 to put their abilities to the test in a bid to be the ranked as the best in the UK.

The 50 players are hand-selected by a consortium of coaches and basketball affiliates all over the UK, before travelling to London to undergo a series of individual drills, combine testing, classroom analysis, strength and conditioning training and competitive games.

It was a successful camp for the trio, with two of the players, Lewis McGlasson and Chris Feeney, recognised in the top 20. The pair finished 10th and 14th respectively.

Tune in now to watch the Top 20 All-Star game now at https://t.co/E1Iaq69JYc#DengTop50 pic.twitter.com/yMewpH4nFj

The camp marks the end of a successful summer for the three, with Chris Feeney representing GB U20s, Louis Sullivan featuring in GB’s U18 3×3 team and Lewis McGlasson being called up to GB U18’s training squad for the first time.

Speaking after his 10th place finish at the camp, Lewis McGlasson hopes his performance over the four days helped him to stand out:

“I came into the camp just wanting to be ranked and make more of a name for myself as I feel like I as a player get overlooked quite a lot, so I wanted to stand out. I knew if I wanted to do that I had to stay consistent throughout the whole camp, as soon as I seen my name ranked 16th on the first day that gave me motivation to keep pushing on to get myself ranked higher and fortunately my hard work paid off and I was able to finish ranked 10th. The coaches and staff do an amazing job of getting the best out of the players and running the camp not just over the four days but keeping track of the players throughout the whole year as well.”

The camps, which are held in several countries throughout the world were founded by Luol Deng. The former GB international has enjoyed a lengthy NBA career with numerous clubs including Chicago Bulls, Miami Heat and LA Lakers.