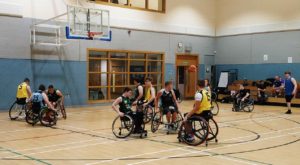 The third and final round of the 2019 Lord’s Taverners Junior League took place last weekend as teams from across Scotland travelled to Aberdeen.

Held at the International School Aberdeen, Lothian Phoenix picked up a win in the only game in the U13 division, defeating Dragon-Flyers Select 20-16, meaning they top the U13 table ahead of the finals.

“Players had the opportunity to pick up some new skills during the camp in the morning, and It was fantastic to see players putting these into practice in the afternoon’s league games, cheered on by friends and family. This is a really good sign of what’s to come for wheelchair basketball in Scotland and we’re excited to build on this with the help of Lord’s Taverners”

The Lord’s Taverners Junior League Finals will be held at the end of this year, with the teams gathering once again to battle it out for top spot.