With the 2019/20 SBC season just two weeks away, basketballscotland invited The Church of Hoops to preview the Senior Men’s and Senior Women’s Leagues. TCoH looks at the comings and goings from across Scotland, as well as offering their thoughts on the season ahead: 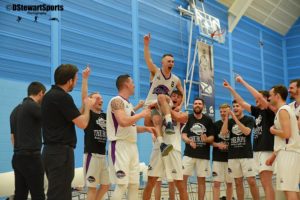 The 2019/20 season is set to get off to a thriller. With reigning champions Dunfermline Reign hoping to retain their title, the league will welcome promoted sides Perth Phoenix and Ayrshire Tornadoes who dominated the second division last season, who will both be hoping to make some noise in the top flight.

Dunfermline Reign have had a shuffle of the pack with some positive additions coming from their youth system. Captain Kieran Lynch said,

“We’re looking forward to playing some competitive games after a long off season. Definitely looking to lift more trophies with what will be a slightly different team. Our youth system has produced again, giving us young players capable of playing big minutes. This shows the great work done by the club at every age group.

We are still a fairly young team with a majority of our guys being 25 and under, so we should manage to be an athletic and consistent team. We’re just really Looking forward to get back to playing and challenging for the top four and pick up some more silverware, the taste of our first championship has made us hungry for more.”

An opening set of fixtures against Edinburgh Lions, Boroughmuir Blaze and the two promoted sides, the Fife side will be hoping to rack up some early W’s and top the table in the opening weeks.

One of the biggest news stories of the summer was St Mirren signing Adam Hammerschmidt from Sony Centre Fury. The Austrian forward signed for Fury after a successful stint in the BBL with Glasgow Rocks and enjoyed some fruitful years with the Falkirk side lifting 4 titles, including a treble, 2 Finals MVP’s and setting the SBC 3pt record with 14 in one game.

Hammerschmidt will complement the returning core Saints hold with inside threats of Chris Cleary as well as the scoring prowess of Nick Collins. Saints had more movement in the squad as tenured head coach Stu Glass stepped down to make way for first year head coach Matt Giroux.  The new head coach recently spoke on his desires to incorporate the youth teams more into the senior side, with Saints already boasting young talent in the likes of Euan Birch who debuted last season, the future looks bright for the Paisley outfit.

Coaching changes were also made in Edinburgh as Kings’ Craig Nicol swapped over to the Women’s side and Paddy Campbell took the reins of the Men’s squad along with Gareth Lodge. Lifting the Playoff title last year in dramatic fashion with a game winning 3 from Konrad Kantorski, Kings will be looking to push on and fight for another league title.

Pre-tip off favourites will be the new looking St Mirren, but it will be no walk in the park for them. Kings, Fury and Reign will all be pushing for the top with Boroughmuir Blaze potentially being a dark horse and causing some early upsets. Newcomers Ayrshire Tornadoes are no mean feat either, their Scottish Cup quarter Final victory over Edinburgh Kings shows their ability to handle top tier Division One talent. This promises to be an exciting season.

Our opening week game to watch will have to be Fury v Saints, first game of the season and Hammerschmidt makes his return to Grangemouth, an old rivalry to get the season underway with a bang.

For more from The Church of Hoops throughout the year, visit thechurchofhoops.com