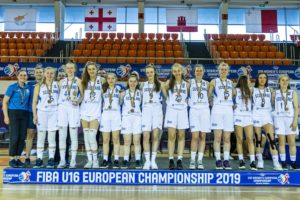 Scotland’s WBBL side, Caledonia Pride, has today added five young Scottish players to their roster for 2019/20.

Four of the five – Jenni Torrance, Eahba Kerr, Rose Havrey and Jannike Marshall – featured for Scotland U16’s during the summer as the team won bronze in Moldova. Ella Doherty, the fifth player to join Pride, spent the Summer with GB U16 Women, starting regularly as they competed at FIBA U16 Europe Division B in Bulgaria.

Most of the players gained experience in the WBBL last season, with West Lothian Wolves’ Jenni Torrance the only player to make the step up for the first time.

Pride’s Head Coach, Bart Sengers, believes the five will play varying roles throughout his team this year but is excited by the attitude shown by the players in the first week of training:

“We are excited to be able to provide some of Scotland’s promising young players the opportunity to gain experience within our program and play minutes in the WBBL. Four of the five have already gained some experience in the second part of last season and it seems they have all enjoyed the experience and are ready to fight for more minutes and bigger roles. Judging on how they have shown up during our first week of practice I am confident all of them will make significant improvements this season. They all are jumping on every opportunity to improve and learning to take charge of their own development. It means growing up fast in many ways. They are all getting incredible support from their families to be able to do this which is great to see.

Ella comes back with the most experience and she should be a rotation player from the start. Jannike showed us last season before she got injured that she could possibly already contribute as well but there is no pressure on her. Eabha and Rose both played a few minutes in a few games and they both need a bit more time to adjust and get used to playing at this level. They will get another year of experience but this time as full members of the team. Last but not least, Jenni Torrance has chosen to join our program after a good summer with the Scotland u16 team. Jenni has shown a lot of promise and has clear ambitions. I am excited to help her reach her goals.”

Caledonia Pride’s season gets underway in late September as the team travels south to compete in the WBBL trophy.