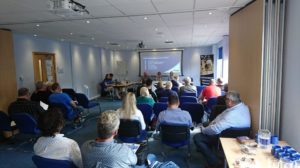 During the Annual General Meeting on Sunday, elections were undertaken for five positions on the basketballscotland Board.

In October last year, a process was undertaken to find individuals who could fill skills gaps on the Board.  In December, Craig Chambers (Commercial), Doug Folan (Performance), Robyn Love (Wheelchair Basketball) and Stephen McCall (Business Operations, Change Management) were co-opted to the Board.

On Sunday, all four were formally elected to the Board by the members.  Alongside their skills and experience, they all bring a passion for basketball to their Board roles, each having being involved in the game for some time, while Doug has extensive professional and volunteer experience in Scottish and British sport.

Having served for the past two years, Stephen Ferguson was re-elected for a further term.  Stephen has extensive experience in communications and has also served as Vice-Chair and Equality Champion on the Board.

David Davies, Chair of the Board, commented:

“We were delighted by the quality of the Board members we have been able to attract and pleased that the membership have supported their nomination and formally elected them to the Board of basketballscotland.  I believe we have a great balance of skills and knowledge, along with individuals who help build the culture we want, and contribute to an effective Board that will continue to drive our sport forward.”