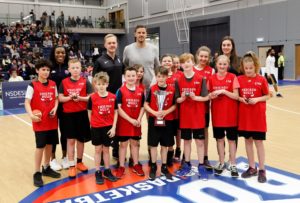 The structure and dates for the 2019/20 Jr. NBA programme have been set ahead of its return later this month.

Building on the success of 2018/19, a second league has been introduced for the upcoming year, as well as the world’s first ever wheelchair basketball league. The expansion means that over 600 players will now be involved with the Jr. NBA programme in Scotland.

The first league, and the wheelchair league, will run from September to December, with the second league taking place from January to March next year.

Amy Kirkhouse, basketballscotland’s Participation Manager, is looking forward to the return of the Jr. NBA for a third year:

“In the first year we had teams from Edinburgh competing and last year we added schools from Glasgow, Aberdeen and Inverness. This was a huge success and opened up a great opportunity for kids to play basketball across the country. We’re delighted to continue our partnership with the Jr. NBA and be expanding yet again to get more young players involved.”

Further information on the draft and details on the first Jr. NBA wheelchair league will be announced shortly.