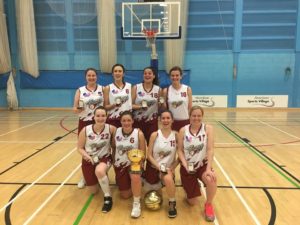 The draw for the 2019/20 SBC Chairman’s Cup took place this week as clubs from across Scotland are set to compete for both the Men’s and Women’s Cup.

Banchory Stags lifted the 2018/19 Men’s Cup after a 76-62 win over BC Lituanica, whilst the Women’s Cup was lifted by Granite City Flames after a 62-34 victory against Grampian Flyers. The two teams will face Edinburgh University and Dunfermline Reign respectively in their first ties of the new season’s competition.

Both competitions will begin with the Round of 16 in October,  with the Quarter-Finals scheduled for late December. The Semi-Finals will follow in February 2020 before the Finals take place in March.

The full Men’s draw can be found here: Men’s draw