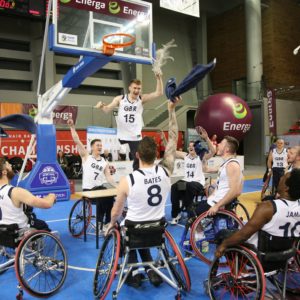 GB Men’s Wheelchair capped off a memorable summer of British basketball in style as they picked up gold at the 2019 European Championships in Poland.

The team, which includes Scotland’s George Bates, went unbeaten throughout the tournament. A 77-52 win over Spain in Sunday night’s Final ensured GB retained their European crown.

GB enjoyed a strong start to the tournament, defeating Italy 76-54. The second game was even better for the team, as they picked up a huge 90-35 win over Switzerland. It was a successful game for Bates on a personal level too, as the Scot recorded a double-double (14 points, 10 rebounds, 3 assists ). Game three saw both Bates and GB record their tournament high tally, with Bates scoring 24 of GB’s 95 points in another big win over Austria (95-39).

With a win needed to secure their place in the Quarter-Finals, GB again proved too strong for their opposition, this time Poland falling 83-61. Germany were set to prove the toughest test to date for GB in the final group game, however the Brits again came out on top, 75-58, to go 5-0 ahead of the knockout stages.

Despite playing five games in as many days, GB showed no signs of slowing. Bates again put on a show, recording 18 points, as the team progressed to the Semi-Final with a 93-51 win over France. Turkey awaited in the Semi-Final, and they proved to be hard work for GB. It was GB who triumphed however, coming from behind to book their place in the Final with a 94-81 win.

GB started as they meant to go on in the Final, taking an 16-7 lead against Spain. Their lead was extended to 14 at the half, 35-21, as they looked to reclaim the European Championships in style. GB added seven more points to their advantage in the third and they showed no signs of slowing as they ended the game up by 25, 77-52.

Bates, who averaged 11 points and 5 rebounds per game, praised the strength of GB’s squad:

“I’m so happy to have won the European Championships, it’s another step in the direction that we want to head. It was different for us to go into a tournament as maybe the favourites and the pressure that brings, but the strength in depth of our squad is amazing and it took us through every challenge that was in front of us.”

The European Championships makes it back to back golds for GB following their 2018 World Championship Success. The squad will be aiming to go for three-in-a-row with Tokyo 2020 up next.