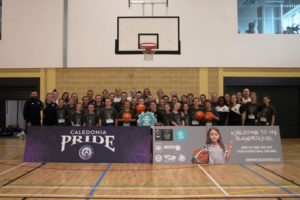 Caledonia Pride held their first ever basketball camp on Saturday as part of FIBA’s ‘Her World, Her Rules’ campaign.

With tickets selling out in just a few days, 30 young female players aged 8-14 attended the three hour session at West Calder High School.The camp was a huge success, with players working on a number of fundamental skills such as ball-handling, dribbling and shooting, all of which were coached by the WBBL side’s players.

‘Her World, Her Rules’ is a unique project and social media campaign, led by FIBA Europe and aimed to promote women’s and girls’ basketball across Europe. The camps, which are supported by GB Basketball and the national governing bodies, have been taking place across the UK over the last few months.

Pride’s Hannah Robb, who worked with the young players on shooting drills throughout the day, hopes the camp is the first of many:

“It was really, really good! I had fun as a coach and I think all the girls did too. You could see the from the smiles on their faces as they left that they really enjoyed it. It’s the first time we’ve done this so we’re looking to build on it and hopefully do more in the future. It was also good for us as coaches and players to get out and engage with the girls who do so much for our program too.”

The camp was the first of many planned by the club over the coming 12 months.