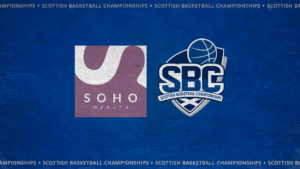 basketballscotland are proud to announce a new partnership with Edinburgh-based Soho Wealth.

The new partnership will see the short-term lending specialists become the title sponsor of the two Senior SBC leagues for the next two seasons, meaning 2019/20 and 2020/21 will see the leagues named The Soho Wealth Scottish Basketball Championships.

With five teams sharing six trophies across the Senior SBC competitions last year, the new campaign is set to be both competitive and entertaining as the SBC continues to grow and develop.

“We are delighted to partner with basketballscotland as title sponsor of SBC Men’s and Women’s League. Soho Wealth is passionate about sports involvement and we are truly excited to be involved in the Scottish leagues.”

Barry Lang, basketballscotland’s Head of Basketball, is looking forward to working alongside Soho Wealth over the next two years:

“We are proud to welcome Soho Wealth on board to support the growth of the game over the next two seasons. We’re looking forward to having a successful partnership off the court and also continued success from the teams on the court.”