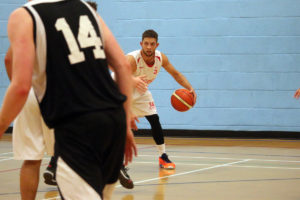 Sony Centre Fury had to come from behind after surrendering a 16-point advantage to start the new season with a win, defeating St Mirren 85-81 in Grangemouth on Friday night.

Fury’s Ziggy Dauksas recorded the first basket of the new Soho Wealth SBC season but it was St Mirren who took the early lead. Scotland’s Nick Collins (20 points) shot three of four from free throw line as Fury gave away some early fouls before Adam Hammerschmidt (14 points) – who moved from Fury to St Mirren in the summer – hit the first 3-pointer of the night.

Despite opening up a six point gap, the game was fairly even for the duration of the first as Fury responded The lead changed hands on several occasions before the quarter drew to a close with the visitors up by just a point. 20-21.

A quick 6-0 streak at the start of the second saw Fury up by 5 and they continued to build momentum as they added an and-one from summer signing Makaleb McInnis (31 points) and a three-pointer from captain Keith Bunyan. St Mirren finally stopped the streak, with both team trading baskets before a timeout was called.

The break in play had little effect for St Mirren as Fury went on another streak, 7-0, to open up a sizeable advantage. Down by 16, St Mirren slowly edged back into the game – inspired by Collins who recorded nine consecutive points for the Paisley side – and by the half they’d reduced Fury’s advantage to nine. 49-40.

St Mirren had a strong start to the third as Scotland’s Chris Cleary (19 points) added six quick points. With Fury’s advantage gone, the excitement around the court ramped up as both teams looked to gain an advantage.

With two minutes left in the third, there was just two points in it. Collins’ buzzer-beating jumpshot circled the rim as St Mirren looked to tie the game, a shot which was followed with another timeout. Bunyan netted a three-pointer to open Fury’s lead to five but St Mirren replied instantly through Collins. By the time the buzzer sounded the game was tied. 61-61.

Two minutes of the fourth went by without a basket before St Mirren regain the lead courtesy of Euan Birch. The three-pointer sparked an 8-0 streak for St Mirren as they looked to have cemented a massive comeback victory, up 69-61 with five minutes remaining.

Fury weren’t going to let that happen however and a late push – inspired by 13 points from McInnes – saw the home side get back into the game again. With just a single point in it for the last few minutes, a late and-one from McInnes secured the win for Fury. 85-81.

Speaking after the game, Head Coach John Bunyan acknowledged the importance of the opening night win as his team looks to push for silverware throughout the season:

“It was a crucial game for both teams. Annually St Mirren and Fury are up in the top four, if not winning the league or runners up so it’s really important for both teams and to get the win at home was great as it would be tough going on the road to St Mirren with a loss.

I’m glad we’re sitting 1-0. Both teams have new players and are just building, I would imagine that during the season both teams will improve. More organised, more structured and the players will know each other a lot better, so I think both teams are going to be a force to be reckoned with this season.”