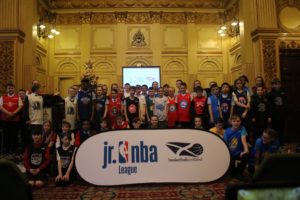 The draft for the first Jr. NBA Leagues of 19/20 will take place at Edinburgh City Chambers next Monday, September 23rd.

Pupils and staff from schools across Scotland will gather for the event as each school is paired with an NBA team for the duration of the programme. Each player will also receive an NBA branded jersey to wear throughout the league as they represent both their NBA team and their school.

The event will see both the Jr. NBA Wheelchair League and first of two Jr. NBA Leagues drafted, with all in attendance invited to a coaching session at The Crags in the afternoon. The pupils will also be joined by professional Scottish players Gareth Murray and Hannah Robb.

Following on from the draft, each team in the league will play eight games in their division before Conference Finals and Final Fours allow the schools from different divisions to come together for more action.

“We are excited to get the Jr. NBA programme started for the 19-20 season with the Draft on Monday. We are looking forward to welcoming pupils and staff from both the running and wheelchair Leagues to participate in the day and find out which NBA team they will represent for the competition. Edinburgh City Chambers is an historic venue so hosting the world’s first ever Jr. NBA Wheelchair Draft there seems very fitting.”

Updates from the draft will be brought to you live from basketballscotland’s social channels throughout the day.