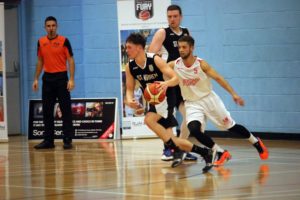 basketballscotland’s Game of the Week saw Sony Centre Fury and St Mirren push each other all the way on Friday night, with the home side eventually claiming an 85-81 win. Fury’s Makaleb McInnes recorded a game high 31 points, whilst Nick Collins registered a team high 20 points for the visitors.

📽️| "To be fair either team could have won so i'm glad it was us"@Furybball1's John Bunyan discusses his team's opening night win.#SBCGotW pic.twitter.com/cE3oRdofJz

Elsewhere in the division, Dunfermline Reign began their season with a 72-65 win over Edinburgh Lions on Saturday afternoon. There was additional reasons to celebrate for the 2018/19 champions, as two homegrown players made their senior debuts during the win.

It was a tough start to life in Soho Wealth SBC Division One for Perth Phoenix, as the promoted side lost 88-67 on the road to City of Edinburgh on Friday night. Kings’ Finlay Wood made the headlines in the tie, recording eight three-pointers in the first half.

The results over the weekend mean City of Edinburgh Kings top the table after week one. The full table can be found here.

First 19/20 Jr. NBA draft to be held next week
This site uses cookies: Find out more.
Scroll to top