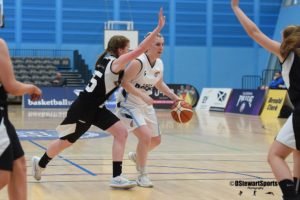 Game of the week heads West this weekend as St Mirren face Lady Rocks in the Soho Wealth SBC on Sunday.

With both teams picking up wins on opening weekend, and both sharing ambitions of ending the season with some silverware, it’s set to be another exciting fixture.

The two teams finished first and second in the SBC last season, with Lady Rocks’ record of 15-1 seeing them claim the Championship over St Mirren. Lady Rocks also came out on top in the Playoff Final, winning 65-49 to claim a domestic double.

St Mirren, who started their campaign with a 53-31 win over Sony Centre Fury last weekend, will be hoping to gain an early advantage in the new season with a win. Nicole Davidson led the way for the visitors in the win, recording 17 points, and will be one to watch on Sunday.

Lady Rocks also picked up a win on week one, defeating Perth Phoenix 63-38.

St Mirren’s Chris Cleary believes his team are ready for Rocks after an opening weekend win:

“After a good win to start the campaign the guys are training hard ahead of the weekends match up against Lady Rocks. I fully expect the game to be extremely competitive, but I feel we are ready for the challenge.”

Colin Haldane, Head Coach of Lady Rocks, is hoping for a good result despite a number of changes to his squad:

“It’s always a tight game when we play St. Mirren.  Our team has changed a lot this year and with only having played one game, this fixture comes early in the calendar.  We hope to make a good account of ourselves despite losing players to work commitments and injuries.”

Supporters are encouraged to head along to Lagoon Leisure Centre for the game, which is part of a triple header between the clubs as the U16 and U18 teams face off earlier in the day.