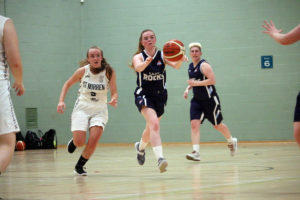 Lady Rocks held off a late St Mirren comeback at Lagoon on Sunday, taking the win 54-46 in this week’s Soho Wealth SBC Game of the Week. The victory sees the team maintain their 100% start to the 19/20 season.

Rocks took an early advantage in the game as they led 10-6 after five minutes. St Mirren kept themselves in the game and reduced the deficit to just two, with their early points coming largely from the free throw line as Rocks conceded some early fouls.

With Both Iona Ross (13 points) and Kayleigh Seller shooting two for two with their free throws, Rocks tried to reply with a three-pointer. The shot failed to fall for Rocks, however the rebound was claimed by the attacking side and they added a layup to end the first up by four. 10-14.

An early 5-0 streak from Rocks, including a three-pointer from Nadele Strain (14 points), saw the visitors extend their lead to nine within a minute of the restart. Another jumpshot followed for Rocks, forcing St Mirren’s Chris Cleary to take a timeout. St Mirren broke Rocks’ streak through Sarah Hunter but another three-pointer from Strain saw the away side’s lead reach double figures.

St Mirren responded with an eight-point streak of their own later in the second quarter, narrowing the gap between the sides but Rocks replied with six unanswered points. A three-pointer from St Mirren’s Fiona Harris (8 points) made it a six-point game at the half. 26-32.

Almost two minutes passed in the third before Rocks opened the scoring, scoring back-to-back baskets to go up ten. A sole reply from St Mirren followed before Rocks took control and added eight more points – Including five from Rona Lightbody (15 points) to open up a 16-point cushion.

Rocks’ defence was the talking point of the third as St Mirren failed to find the basket for a large part of the quarter. A single point added from the free throw was the only other score in a quiet quarter for both sides. 28-45.

Rocks stretched out to a game-high 23-point advantage with a quick start in the fourth. St Mirren missed both shots from the free throw line as they looked to break their scoreless run. Ten minutes after their last basket, Rebecca Cleary (10 points) added to St Mirren’s tally with six minutes to play.

The basket sparked the home side back into life as, after a brief spell of going basket for basket, they scored 16 unanswered points. The run slashed Rocks’ advantage from 23 to just seven, however it proved too little too late as the buzzer sounded and Rocks claimed the win in Paisley. 46-54.