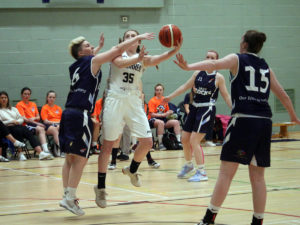 Week Two of the Soho Wealth Senior Women’s SBC saw Lady Rocks, Edinburgh University and City of Edinburgh come out on top in their respective fixtures.

Rocks’ Head Coach, Colin Haldane, praised his side following the win in Paisley:

Edinburgh University won their first game of season, beating Glasgow Fever 52-35 in Glasgow. Captain Laoise Carey was top scorer for Edinburgh, with the team also featuring four of Scotland’s U16 squad who won bronze at FIBA U16 Europe Div C over the summer.

City of Edinburgh also picked up a win in their opening fixture, defeating West Lothian Wolves 91-34. All 12 players on Kats’ roster scored during the win, with Emma Findlay and Tracy Phillips leading the way with 12 points each. Zoe Gibson recorded 10 consecutive points for the home side in the fourth as they started their 19/20 season with a comfortable victory.

After two weekends of action Lady Rocks top the table with two wins from two. The full table is available here.