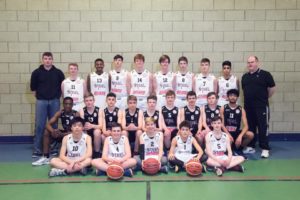 Over the last four years, Fife Steel Basketball Club has developed from what was Dunfermline Steel to a progressive new club with a strong focus on their local community. During this time, basketballscotland has supported the stakeholders behind the club’s progress to grow Fife Steel into a flourishing club with a member of staff and a basketball curriculum programme central to a local high school.

In Summer 2017, Fife Steel Basketball Club had met with basketballscotland at Balwearie High School in Kirkaldy. The club had a leadership group with a diverse skillset, determination and strong ambitions to match the community reach that their neighbouring basketball clubs achieve.

Since the original meeting, the club has worked closely with basketballscotland, taking several key steps to achieve their ambitions. The organisations worked together to highlight and access venues in Kirkcaldy which could give them a ‘home’ alongside their current location at Balwearie High School. St Andrew High School signed a key holder access agreement with the club shortly afterwards, providing a home court which is still used today.

Small and sustainable growth was established as the best strategy for Fife Steel. The club’s early focus centred around people, with the aim of developing club coaches over the next 12 months. Working with Dunfermline Reign, Steel developed a partnership which allowed a paid coach to support key pathway teams and mentor club coaches in the programme.

In the following year, Steel worked to grow their coaching workforce with the understanding that coaches are central to delivering popular programmes, building strong relationships with players and attracting new members. Having established a strong foundation of coaches, the club turned their attention to growing participation at grassroots level.

During the same period, the club worked with basketballscotland to seek medium and long-term solutions regarding employment of staff, having seen first-hand the positive impact that paid staff members have on other Scottish basketball clubs.

Together, basketballscotland and the club explored several employment options. After careful consideration it was decided that a Modern Apprentice employed on a 25-hour contract provided the best approach for the club, whilst the Apprentice would also benefit from undertaking a SCQF Level 3 award in Sport & Leisure Management.

Since employment in September 2019, the Modern Apprentice has embedded himself into the Kirkcaldy community, working with club pathway teams and the local Active Schools staff. The key remit to this role is establishing a CashBack School of Basketball programme at Balwearie High School.

basketballscotland’s CashBack School of Basketball provides an alternative and engaging lesson for pupils with the aim of increasing attendance, attainment and improving behaviour of disadvantaged young people enrolled at the school. The programme offers Fife Steel a way of intentionally making a positive impact on the lives of young people, whilst also serving as a pathway to encourage more  players into the club’s youth teams.

Having worked with the club closely over the last two years, basketballscotland’s National Development Manager, Adam Szymoszowskyj, is delighted to see the club continually progress and grow:

“Fife Steel has proactively taken the opportunity to work with basketballscotland over the last few years. The club asked for support, which always makes it easier for us to achieve positive results together. It allowed us to embed our expertise around the club, which we believe has had clear benefits for them. We have been on a journey which has strengthened core areas of the club, working to grow in a maintainable manner and building from there. The fact the club now has a member of staff to strengthen the pathway is a testament to the club’s leaders. The club has realised they can make a bigger impact than just delivering sport and are starting programmes to make a positive difference to people’s lives.”

Any clubs with questions regarding how basketballscotland can offer support, please contact Adam at adam@basketball-scotland.com.

SBC GotW: SBC U18 Men’s round up
This site uses cookies: Find out more.
Scroll to top