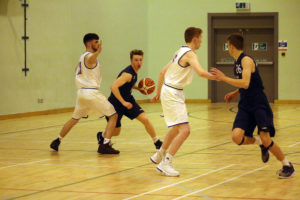 Stirling Knights U18’s survived a scare in Bathgate as they maintained their perfect start to the 2019/20 SBC Season with an 82-70 win over West Lothian Wolves.

Wolves’ Tom Ferguson scored the first basket of the game as the home side started strongly in Bathgate. Ferguson added four more after Stirling recorded their first points as Wolves opened up a four-point lead early on. Stirling Coach Les McGlasson was forced to call an early timeout as Wolves edged further ahead.

Callum Mortimer added the game’s first three-pointer, briefly extending Wolves’ lead to nine, but Stirling game back into the game and after an 11-2 streak – Inspired by Captain Rob Gilmour (31 points) – they had the game tied. An and-one from Man restored a three-point advantage which the home side held for the remainder of the period as the teams traded basket for basket. 20-17.

Wolves struck first in the second but it was quickly cancelled out by an and-one from Gilmour. Stirling’s Captain then added a three-pointer to make it a one-point game. Wolves went on a 8-0 steak to restore their advantage before Knights replied through Ben Ritch.

Two free throws from Rory Bell followed by and-one from Jack Hencher tied the game for a second time. Wolves added three more quick points – including one from free throw line – before Knights replied with two for two from the free throw line to keep the two teams neck and neck at the half. 35-34.

Wolves again started the quarter the better side, recording a 6-0 streak before Knights found the basket from outside the arc with seven minutes left in the third. Wolves immediately replied with their own basket from distance. Another three-pointer from Man stretched Wolves’ lead to eight, but Stirling replied with another three-pointer of their own.

Seven more points followed from Stirling and again the game was level. Mortimer briefly stopped Knights’ streak but their momentum continued, adding six more quick points – including five from Ben Roberts – to open up a gap in their advantage for the first time. Wolves added a buzzer-beating three through Huw Adams to narrow Stirling’s lead to four at the end of the third. 54-58.

Wolves narrowed gap to two early in fourth and a free throw made it a one-point game with nine minutes to play. Gilmour’s third three-pointer of the game wiped out Wolves’ early work and started a 5-0 streak for Knights. Stirling’s three-point shooting proved the difference late on as Hencher added three to move Knights seven points clear.

Stirling’s lead was soon slashed back to two as both teams fought to edge in front. The teams traded baskets before Hencher added his second three-pointer gave the visitors a nine-point lead with two minutes to play. Stirling extended their lead to a game-high 12 with a minute to play and held on to take the win. 82-70.