One month on: Scots with GB

One month on: Scots with GB 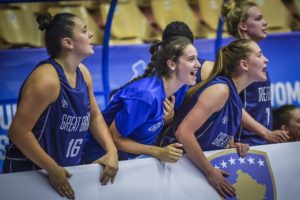 It was a busy summer of basketball for Scots representing Great Britain as eleven players featured in eight different European competitions throughout July and August.

One month on from the final games, take a look back at how each player got on during international duty:

Pollyanna Storie was the first player to compete, as she featured for GB U18 Women at FIBA U18 Europe Division B. The Caledonia Pride player averaged 6 points and 5.8 rebounds in Skopje.

Robyn Love travelled to Holland with GB Wheelchair Women, achieving a silver medal at the European Championships. The medal secured the team’s place at the 2020 Tokyo Paralympics.

Chris Feeney played his second year with GB U18 Men, this time in Greece. The team secured their Division A status with a win v Montenegro in the round of 16.

Into August, and three Scots travelled to Kosovo as part of GB U20 Women’s Roster. Alix Henderson, Shawnisay Millar & Sian Phillips all featured for the Brits, as they narrowly missed out on bronze and promotion to Division A.

Whilst all the age groups competed at the traditional European Championships, Owen Mackle & Louis Sullivan both travelled to Italy to play for GB U18 Men’s 3×3 side. The pair were joined by Gareth Murray who coached the side.

Murray was also in action as a player throughout the month, as GB’s Men went 4-0 in their EuroBasket Pre-Qualifiers. The team return to action in the Qualifiers next February.

There was also Scottish representation in the coaching staff, as City of Edinburgh’s Craig Nicol travelled with GB U16 Men.

GB U16 Women were the final youth team to play during the summer, with Perth’s Ella Doherty starting throughout the campaign as the team finished 6th in Bulgaria.

George Bates was the final player in action, as he travelled Poland with GB Wheelchair Men. Bates and the squad concluded the summer in style, picking up gold and securing their place at Tokyo 2020.