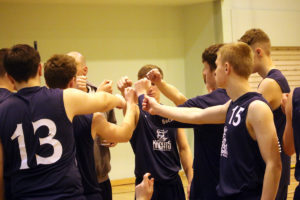 The third weekend of the 2019/20 SBC season saw basketballscotland focus on the U18 Men’s division, with four games taking place throughout the country.

Stirling Knights remain unbeaten as they came out on top in a close encounter v West Lothian Wolves in the weekend’s SBC Game of the Week. Knights’ Captain, Rob Gilmour, picked up a game-high 31 points for the team as they remain unbeaten and sit top of the SBC U18 division. West Lothian Wolves’ Kieran Man was the top scorer for the hosts with 27.

St Mirren are the second team still unbeaten during 19/20 as they claimed a big victory (98-26) over Inverness City, adding to their previous wins v Sony Centre Fury and Grampian Flyers. Six St Mirren players recorded over 10 points in the game, led by Cameron Stalker with 17.

Dunfermline Reign overcame Glasgow Rens 71-48 to maintain their steady start to the season, with a sole loss to Boroughmuir Blaze the only blip so far as they sit fourth in the U18 Division. Reign’s three-point shooting proved the difference in the game as the team found the basket 11 times from outside the arc.

Sony Centre Fury sit one place above Reign in third, with a 72-66 win over Boroughmuir Blaze keeping the team close to the summit and just one point off the leaders.

With Knights and St Mirren leading the way after three games, take a look at the full table here.

One month on: Scots with GB
This site uses cookies: Find out more.
Scroll to top