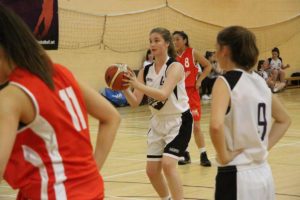 Game of the Week covers the first weekend of the 19/20 Scottish Cup as City of Edinburgh take on Glasgow City in the only Round of 16 fixture in the U18 Women’s division.

The two teams have met previously in the league, with the hosts, Glasgow City, coming out on top with a 66-54 victory.

Glasgow City are featuring in the U18 Women’s division for the first time, and have two losses and a win from their opening fixtures. Their opening weekend victory over tomorrow’s opponents was followed by defeats to Lady Rocks and Perth Phoenix.

City of Edinburgh return to the division after a year out, and have had a tough start to the new campaign with three defeats to Glasgow City, West Lothian Wolves and Perth Phoenix respectively.

Both teams will be hoping for a win to progress into the quarter-finals of the tournament.

Toni Carvill, Glasgow City’s Head Coach, is looking forward to another game against City of Edinburgh:

“It’s our first season at U18 and we are looking forward to this weekend’s cup game. We played Edinburgh City our first game of regular season and it was a good game and no doubt they will be ready to play to the final whistle again. The girls and I are excited and looking forward to playing a well-coached team, for what should be a fantastic game.”

Portobello High School is the venue for tomorrow’s game, with seats available within the hall for those wishing to come along.