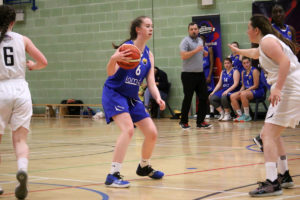 A strong defensive display from Glasgow City, which saw them concede just 11 points in the second half, earned them a place in the U18 Women’s Scottish cup Quarter-Final after a 63-39 win over City of Edinburgh Kats.

Both teams traded baskets in the early exchanges before a 6-0 streak from Kats opened up a four-point advantage for the hosts. Glasgow’s Divine Obi recorded an and-one to make it a one-point game with six minutes played. The visitors continued to gain momentum with another and-one following and were up three when a timeout was called.

City added two more to increase their scoring run to 10, before Kats’ Captain, Ellie McArthur (10 points), added a free throw. Kats looked to get back into it with four more quick points but City responded each time to take a ten-point lead into the break. 9-19.

McArthur started Kats’ scoring in the second from the edge of the arc. Glasgow replied through Scotland U16 player Niamh Rana before Kats recorded an eight-point streak to get the game back to within two points. A break in play for an injury gave the teams a change to regroup and after the restart Glasgow finally broke Kats’ momentum, shooting two for two from the free throw.

A timeout was called with four minutes remaining in the half and Kats continued their momentum afterwards, restoring their lead through Aoife Loftus (14 points). Another two from distance extended their lead to three before another foul allowed City to grab two points from the free throw line. One more basket followed for each team as they ended the half with just a single point between them. 28-27.

Kats started the third strongly as they opened up a five-point lead, but from then on the early stages were all Glasgow as they recorded a nine-point streak themselves, inspired by five points from Grace Adam (16 points), to get back in front.

Hayley McGovern shot two for two from free throw line which Grace Gormley (12 points) cancelled out. Adam added two from the free throw and Glasgow found themselves up by six. From there Glasgow took control of the game, Kats’ hit the rim with a long distance buzzer-beater at the end of the third but it was no use as Glasgow opened up a ten-point lead for the second time in the game. 34-44.

A quick basket from Glasgow followed by a three-pointer from Gormley gave the visitors a game-high 15-point lead. Edinburgh responded but Glasgow maintained control to open up a 21-point lead, led by Niamh Rana.

A low scoring period followed as neither team could find the basket. Niamh Rana ended the drought to take Glasgow 25 points clear. Adam and McGovern added late baskets for each team as Glasgow took the win and booked their place in the Scottish Cup quarter-final.