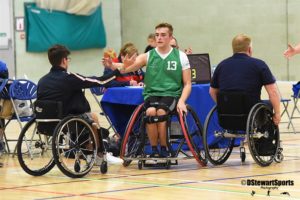 With less than two weeks until basketballscotland’s Wheelchair National Academy squad travel to Belgium for the Leuven Bears international youth tournament, Glasgow Rollin’ Rocks player Ben Leitch, who has also represented GB U22’s, offers his thoughts on the upcoming tournament, the team’s goals and how his GB experience can help the team.

How does it feel to be invited to represent basketballscotland as part of the National Academy?

“Being invited to play for Scotland in any form is a massive honour and to be invited to represent the National Academy is an absolute pleasure and privilege.”

This tournament will be the first time a Wheelchair National Academy team has competed abroad, what part of the trip to Belgium are you most looking forward to?

How have you been preparing for the tournament both as a team and individually?

“Individually, I’m just getting as many reps in as possible just to make sure that I’m ‘feeling’ my shot going into the tournament. Team wise, we have had several training sessions earlier in the year. As a squad we also took part in the National Junior Championships in Worcester.”

What do you expect from the tournament?

“I have high expectations from the tournament. I’m looking forward to seeing what other basketball programmes are like in other countries and how they compare to our setup.”

What are your team and individual goals for the tournament?

“Our main goal is to go out to Belgium and put on a show. We want to win of course, but we also want to enjoy the tournament and have fun. That’s what it’s all about.”

Having played with GB, you are one of the more experienced players in the squad. What did you learn from international duty that will help the team in Belgium?

“I learned a lot with the GB, I learnt that no matter the stage or level, you should enjoy playing the game. If you enjoy the game, you tend to perform better. I also learnt not to worry, and just take a second to relax. The experiences with GB also allowed me to develop standards that I can hold my teammates to and that my teammates can hold me to. If everyone is held to the same standards, then the other teams have a big problem coming their way.”

Looking at the bigger picture, what does it mean to you to see youth wheelchair basketball in Scotland continue to expand and grow?

“It means a lot. It’s just incredible seeing how much growth has happened in the past couple of years, the amount of potential coming through the system is amazing.”

The squad fly out to Belgium late next week ahead of the tournament which tips off on October 18th.