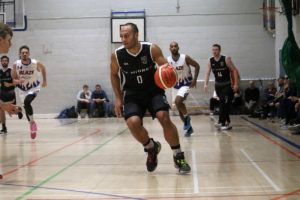 St Mirren made it four consecutive wins on Friday night as they overcame Boroughmuir Blaze 85-74 at The Crags.

It was the home side who recorded the first basket of the evening as Yannick Onifade (20 points) found space in the paint. Chris Barron (11 points) opened St Mirren’s account from the wing and, after a Blaze free throw, St Mirren stormed ahead to a 10-3 lead through Nick Collins (22 points).

Blaze came back into the game as a ten-point scoring run was only broken by a single free throw from St Mirrren’s Chris Cleary (15 points). Blaze’s Enrique Moreno Caballero (17 points) found the basket with a jump shot as the home side regained their lead. It was St Mirren who had the final say in the first however as they ended the quarter up by one. 17-18.

It took just 12 seconds for Blaze to get themselves back in front in the second and within the first few minutes the lead changed hands four times. Back to back three-pointers from Caballero put the home side in front before five more quick points saw Blaze up by eight.

Chris Cleary added a big three-pointer and Barron added two more before a timeout was called. St Mirren took control of the game following the break, adding six quick points to once again move in front. With St Mirren now leading by eight, Onifade added the final points of the half to cut the deficit to four. 40-44.

It was one-way traffic at the start of the third as St Mirren scored 15 without reply to open up a game high 19-point advantage. Collins led the way for the visitors with six consecutive points during the streak, With Cleary and Fergus Hatre (10 points) also contributing.

Having gone over four minutes without a basket, the latter stages of the third were all Blaze as they chipped away at St Mirren’s lead for the second time in the game. Six different players contributed to Blaze’s 19-3 run, including six points from Eoghann Dover (11 points) and another three from Caballero, as the hosts cut the gap to four with ten minutes left to play. 58-62.

Caballero’s fourth three-pointer of the game brought Blaze back to within a basket of the lead but their hopes of a comeback quickly faded as St Mirren added back to back baskets to keep their distance. A low scoring period followed for both teams before Adam Hammerschmidt (13 points) increased St Mirren’s lead to eight.

A timeout followed and St Mirren again capitalised on the break, recording five more points without reply to take the game away from Blaze. Blaze added two late three-pointers, taking their game total to nine baskets from behind the arc, but the damage had been done as St Mirren held on to take the win in Edinburgh. 74-85.