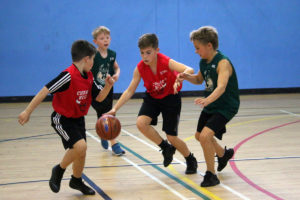 With the first games of the 19/20 Jr. NBA programme taking place across Scotland, including the World’s first Jr. NBA Wheelchair League, take a look at how all the participating schools are getting on in their respective divisions…

The Jr. NBA’s values of teamwork, fun, sportsmanship and hard work were all on display in Dundee as the first Jr. NBA Wheelchair League tipped off in early October.

The second rounds of games are set to be played in Aberdeen on October 26th. View the full league table here.

Each team in the Central division played two games in their opening round of fixtures at Tynecastle High School. Cleveland Cavaliers Balgreen sit top of the table with two wins from two, with other teams all picking up a win and a loss, with the exception of Milwakee Bucks Bonaly who are yet to secure their first win.

Full results and the upcoming fixtures can be found here.

Phoenix Suns St Margarets lead the way in the Pacific division with three wins and a draw from their opening four games. Sacramento Kings St johns and LA Clippers North Queensferry sit second and third in the table with five points each, whilst golden State Warriors Donibrissle and LA Lakers Touch both have four points after the opening round of fixtures.

The Jr. NBA’s aims to use basketball to promote healthy living and, with each team playing four games, the players have all been working hard and exercising.

The results and table can be viewed here, with the second round of fixtures set to be played on October 25th.

The first set of fixtures are due to be played on October 25th at the Crags in Edinburgh. Schools from the division will represent Atlanta Hawks, Washington Wizards, Miami Heat, Orlando Magic and Charlotte Hornets, with local club Boroughmuir Blaze working with schools to organise the games.

View the upcomin g fixtures for the Southeast division here

The first set of fixtures for the Southwest division are set to take place in Grangemouth on October 23rd. The division will be delivered throughout the coming months by Sony Centre Fury. Dallas Mavericks St Margarets are looking forward to getting started with their new jerseys:

Check them out it’s the new @stmargaretsps @dallasmavs @jrnba squad for this years South West Division! This school was selected to be part of the @basketballscot Jnr NBA programme to celebrate basketball in Falkirk. Well done team and looking smart in your new kit! 🏀 pic.twitter.com/jRAByAdu3P

The fixtures for the event on the 23rd can be found here.