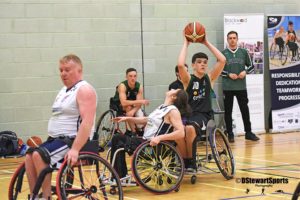 basketballscotland’s Wheelchair National Academy fly out to Belgium on Thursday ahead of the Leuven Bears International Youth Tournament.

Taking place in Blankenberge from Friday 18th to Sunday 20th, the event will see the Scottish side play teams from Belgium and Germany. Hosts Leuven Bears will be joined by fellow Belgian team BC Oostende, as well as Germany’s BG Baskets Hamburg.

The Scottish players have all been competing domestically in both the BWB National Leagues and the CliniMed-SecuriCare SBC Wheelchair league ahead of the tournament, with four Scottish clubs being represented within the squad.

The National Academy’s Head Coach, Jen Scally, is looking forward to the first international trip with the team:

“We are delighted to be competing in the Leuven Bears International Youth Tournament in Belgium. It marks a momentous occasion for the Academy, with this being the first time that one of our Wheelchair Basketball squads will compete outside of the United Kingdom. The potential for development and learning is huge and we are excited to engage and compete with teams from other nations. Our aim for the tournament is to enable athletes and team staff to perform to the best of their potential, both on and off court.”

The team’s results will be shared on social media throughout the weekend for those looking to stay up to date.